NSLSat-1 is Launched to Orbit by a Soyuz-2.1b from Vostochny With New Cloth High Speed Antenna

NSLComm's first satellite, NSLSat-1, has been successfully launched by a Soyuz launch vehicle from the Vostochny Cosmodrome in Far-Eastern Russia.

The company is pioneering privately-backed spaceflight and has designed fabric-like, flexible dish antennas that expand in space to offer high-throughput communications for smallsats that is up to 100 times faster than that of today’s best performing smaller satellites, while also offering substantial cost savings (around 10 times) for larger satellites.

The technology permits antennas to be stowed during launch in a compact volume and deploy while in orbit, saving mass, volume, and supporting structures. Post deployment, the antenna has an innovative "smart" subreflector, the FlexoSub, enabling the antenna to compensate for any reflector shape imperfections and change ground patterns while on the fly.

According to the company, this technology is the only solution that can bring high-speed broadband connectivity to and from small terminals, allowing for a full array of applications around IoT and sensors, in areas such as agriculture, mining, oil & gas, shipping, government and more. The technology can also support large pipes of data for internet and video at costs that are significantly lower than current satellite communication technology offers. 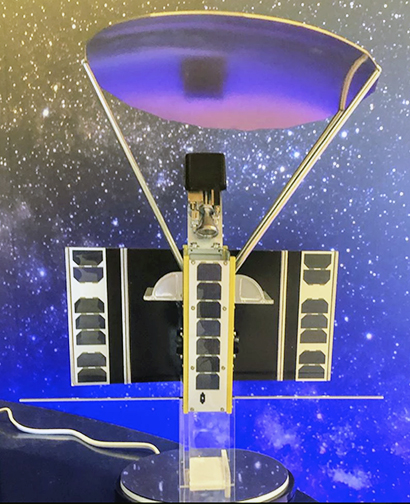 The company is initially targeting the government, IoT and high-throughput and trunking markets, worth an estimated $50 billion annually. Once in space, NSLSat-1 will be tested with a number of tier-one partners from across the automotive, telecom and travel industries. Several weeks ago, NSLComm signed an agreement with Amazon Web Services for the use of AWS Ground Station, a network of ground stations for satellites.

NSLComm, in cooperation with its partners, expects to launch 30 satellites by 2021 and hundreds by 2023, enabling its network of nano-satellites to provide a high-speed worldwide communications for its customers network via an orbiting constellation.

Raz Itzhaki, Co-Founder and CEO of NSLComm, said the launch of NSLSat-1 is a significant achievement for the company and what the firm believes to be a watershed moment for the entire satellite industry. NSLComm's technology represents one of the biggest leaps in satellite antenna performance-to-weight ratios and, with this launch, the firm is on a mission to prove that high-speed satellite communications can be done faster, cheaper and more effectively than it has been to date.

Yoav Tzruya, General Partner at JVP, said NSLComm is changing the satellite communication market in a meaningful manner, providing two to three orders of magnitude improvement in cost per bandwidth, and unlocking a myriad of new applications for several multi-billion dollar markets.