Arianespace Fuels Up For Vega Launch... Sentinel-2A Receives Onboard Propellant @ The Spaceport 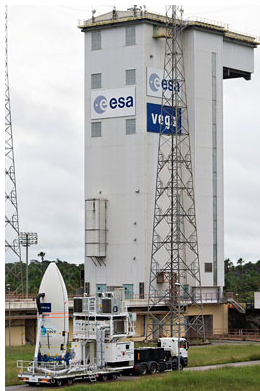 Vega’s completion is highlighted in this photo series, beginning with the “upper composite’s” move to the Spaceport’s ZLV launch site on a special transporter

[SatNews] The fifth Vega has completed its build-up at the Spaceport in French Guiana, allowing final checkout to begin ahead of the lightweight launch vehicle’s June 22 mission with Europe’s Sentinel-2A satellite. 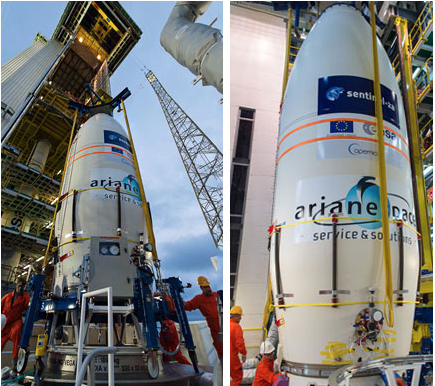 This component subsequently was hoisted to the appropriate level of the launch site’s mobile gantry, positioned over Vega and then integrated with the light-lift vehicle (center and right).

This assembly process concluded with integration of Vega’s “upper composite,” consisting of Sentinel-2A and its protective payload fairing. Installation took place at the Spaceport’s ZLV launch site, inside the facility’s protective mobile gantry.

Vega is one of three launchers operated by Arianespace from French Guiana, along with the medium-lift Soyuz and heavyweight Ariane 5. The development of Vega was performed in a European program led by Italy’s ASI space agency and industrial prime contractor ELV SpA.

The upcoming mission, designated Flight VV05, will mark Arianespace’s fifth liftoff this year using a member of its launcher family, underscoring the company’s sustained operational pace at the Spaceport in 2015. It follows two previous flights for Ariane 5, plus one each with Soyuz and Vega.

Sentinel-2A is the latest in Europe’s series of Earth observation satellites for the Copernicus initiative, which is headed by the European Commission in partnership with the European Space Agency.

Built by prime contractor Airbus Defence and Space, the 1,130-kg.-class spacecraft will deliver high-resolution and multispectral capabilities, providing a 290 km.-wide coverage path and frequent revisits. After its launch by Vega, Sentinel-2A will join the Sentinel-1A spacecraft orbited by an Arianespace Soyuz mission in April 2014.