[SatNews] The launcher for this week's Arianespace Soyuz mission is now ready for the countdown to its September 10 liftoff, having been "topped off" with the payload of two European Galileo satellites at the Spaceport. 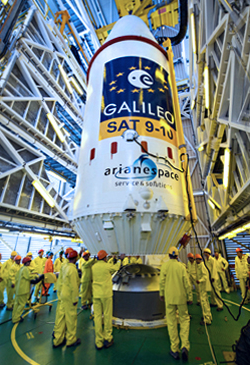 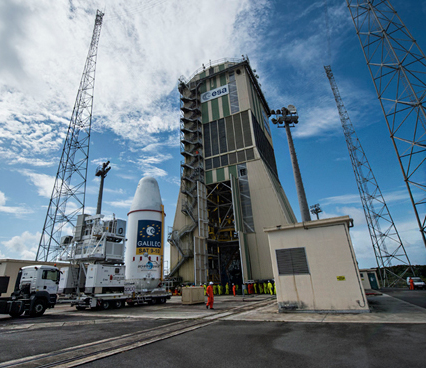 The “upper composite” containing Flight VS12’s two Galileo satellites arrives on the Soyuz launch pad, where the basic three stage launcher awaits inside its protective mobile gantry (photo at left). The upper composite was then raised inside the gantry and installed atop Soyuz (right photo).

This will be the 12th mission from French Guiana for Arianespace's medium-lift workhorse, as well as the company's eighth flight in 2015 with its complete launcher family, which also includes the heavy-lift Ariane 5 and lightweight Vega.

During a busy day of activity yesterday, the basic three-stage Soyuz was first rolled out to the launch zone in the Spaceport's northwestern sector near the city of Sinnamary, followed by its raising to the vertical position and suspension over the launch pad, held in place by four large support arms.

After the 53-meter-tall mobile gantry was moved in to protect the launcher, this mission's "upper composite" (composed of the Fregat upper stage, the two dispenser-mounted Galileo satellites and payload fairing) was hoisted and mated atop Soyuz.

The fifth Arianespace Soyuz flight for Galileo from French Guiana

Arianespace's September 10 mission will be the fifth Soyuz flight with Galileo satellites performed from French Guiana—a series that began with the Russian-built launcher's inaugural liftoff at the Spaceport in October 2011.

RKTs-Progress (the Samara Space Center) is responsible for the design, development and manufacture of Soyuz' three lower stages and payload fairing, as well as for integrating the launch vehicle stages and handling flight operations.  The Fregat upper stage is manufactured by NPO Lavochkinn

The passengers for this Thursday's Flight VS12 are the fifth and sixth FOC (Full Operational Capability) spacecraft in Europe's Galileo navigation program.  They were built by OHB System, with their navigation payloads supplied by Surrey Satellite Technology Ltd.

Galileo's FOC phase, during which the network's complete operational and ground infrastructure is being deployed, is managed and funded by The European Commission. The European Space Agency has been delegated as the design and procurement agent on the Commission's behalf.

The Galileo system will provide high-quality positioning, navigation and timing services under civilian control, and is designed for interoperability with the U.S. GPS and Russian Glonass global positioning systems.