[SatNews] The return of Optus 10 to French Guiana has set the stage for a new phase of payload preparations at the Spaceport with Arianespace’s next Ariane 5 mission, which is scheduled for a September liftoff carrying this multi-mission satellite and its MEASAT-3b co-passenger. 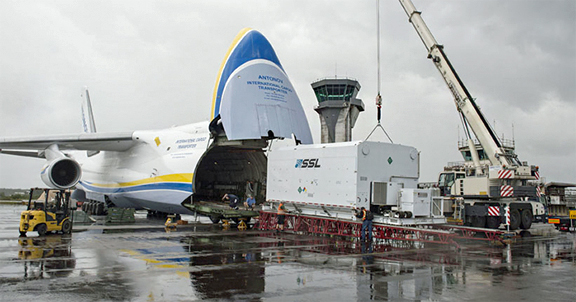 Optus 10 is unloaded from the An-124 cargo jetliner after its arrival at Félix Eboué Airport near French Guiana’s capital city of Cayenne.

Optus 10’s delivery occurred yesterday as the Space Systems/Loral-built spacecraft landed at Félix Eboué Airport near the capital city of Cayenne, where it was unloaded from a chartered Antonov An-124 cargo jetliner for transfer by road to the Spaceport. To be operated by Australia’s Optus telecommunications service provider, Optus 10 is outfitted for direct TV broadcast, internet connectivity, telephone and data transmission services across Australia and New Zealand. 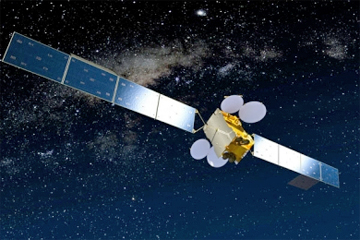 Artistic rendition of the MEASAT-3b satellite.

Joining it on Arianespace’s Ariane 5 mission in September is the Airbus Defence and Space-built MEASAT-3b relay platform, designed to expand Malaysian-based MEASAT’s direct-to-home broadcasting as well as VSAT services to small terminals across Malaysia, India, Indonesia and Australia. MEASAT-3b was put in storage at the Spaceport awaiting the availability of Optus 10 for the upcoming dual-passenger launch—designated Flight VA218 in Arianespace’s launcher family numbering system.  The mission’s Ariane 5 was moved earlier this month into the Final Assembly Building at the Spaceport, where it is being readied for the integration of Optus 10 and MEASAT-3b.