Spacecom’s satellite was scheduled to take off from Cape Canaveral early Sunday, Israel time; delay due to suspect faulty valve on Falcon 9 rocket. 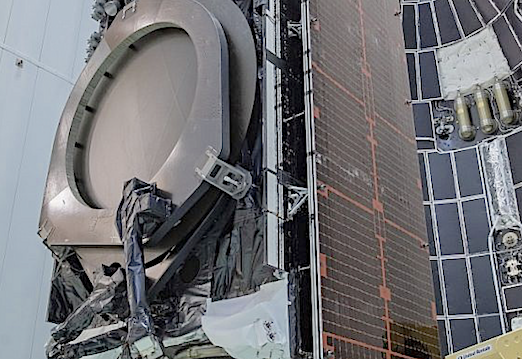 The Amos-17 is scheduled to launch from Cape Canaveral on Aug. 4, Israel time, atop of a SpaceX Falcon 9 rocket (Raphael Mizrahi)

The launch of Israeli satellite Amos-17 planned for this weekend was delayed due to a possibly defective piece of equipment on SpaceX’s Falcon 9 rocket, which was supposed to carry the craft into space. SpaceX tweeted on Sunday that the launch team was now working toward a Tuesday launch instead (early Wednesday, Tel Aviv time.)

Spacecom said in a statement to the Tel Aviv Stock Exchange on Friday that the launch of the satellite from Cape Canaveral scheduled for Sunday at around 1:50 a.m. Israel time (6:50 p.m. Saturday local time) was delayed due to a suspect faulty valve discovered during testing of the rocket. As a result, the scheduled launch date for the satellite will be postponed by a few days. The company will report the exact date when it will be set,” the filing said.

The launch of the Amos-17, the firm’s newest and “most advanced” satellite to provide services over Africa, was scheduled to take place almost three years after Spacecom lost its Amos-6 satellite in an explosion on the launchpad of a SpaceX Falcon 9 rocket in September 2016.

The satellite was built by aerospace firm Boeing according to designs and specifications of the Ramat Gan-based Spacecom, also known as Space-Communication Ltd.

Spacecom is a supplier of satellite services to satellite TV operators, internet and telephone providers, governments and private data companies. The firm, which started operations in 1993, has launched satellites deployed around the globe.

The $250 million Amos-17 weighs 6.5 tons and will be the length of three buses, or some 35 meters (115 feet) long, once its wing-like solar panels are deployed in space. Fifty-five percent of its weight is due to the fuel it will carry, to enable it to reach its designated spot over Africa.

By Shoshanna Solomon, From Times of Israel