UK warned it needs 'space force' to protect interests outside Earth's atmosphere. Threats include jamming satellites, or using lasers or nets to destroy them. Will Whitehorn said the military needed to help protect Britain's space interests. 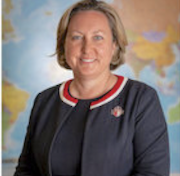 Threats could include jamming satellites, or using lasers, nets or missiles to disable or destroy them.

Will Whitehorn, the incoming president of UK Space, the space industry's trade association, said the military needed to help protect Britain's increasing interests outside of the Earth's atmosphere.

He said: 'We will see and should see the creation of a space force in the UK.'

The former president of Virgin Galactic said that a huge expansion will happen in satellite technology in Earth's orbit and further in future space stations. He added: 'We are about to go through an industrial revolution in space, nothing short of that.

'We have to be able to defend ourselves in space, if we know there are non-state and state actors who may be inclined to disrupt in the future the ability of any nation state to operate commercially in space.

'It is clear that these technologies are capable of being taken to a level of relatively unsophisticated use. What nation states like the UK have to do is make sure we are ahead of that game. And we only get ahead by thinking about it in advance.'