The first of the Airbus-built CSO (Composante spatiale optique) Earth Observation (EO) satellites for the French Armed Forces has been successfully launched on a Soyuz launcher from the Kourou European Spaceport in French Guyana.

CSO will provide very high resolution geospatial information intelligence to the French Armed Forces as well as to the organization's partners Germany, Belgium and Sweden. The CSO satellites are equipped with a highly agile pointing system and are controlled via a secure ground control operations centre.

As prime contractor for the CSO satellites program, Airbus has provided the agile platform and avionics, and was also responsible for the integration work, testing and delivery of the satellites to CNES. Thales Alenia Space provided Airbus with the very-high resolution optical instrument. Airbus teams will also continue leading the User Ground Segment operations, as they do currently with operating legacy programs (Helios, Pleiades, SarLupe, Cosmo-Skymed). 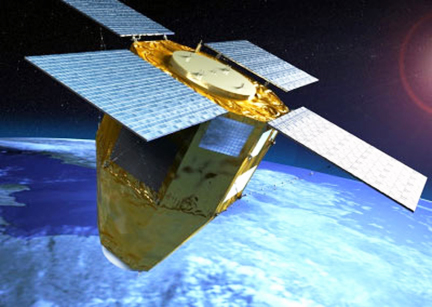 Artistic rendition of the CSO-1 satellite.

Airbus was awarded the CSO contract at the end of 2010, by CNES, the French space agency acting on behalf of DGA, the French Defence Procurement Agency. The contract included an option for a third satellite, which was activated after Germany joined the program in 2015.

The satellite's tremendous agility and stability enable it to quickly provide users with extremely high-quality images from the Thales Alenia Space instrument, even for the most complex acquisition schedules. Airbus has made use of the latest generation of gyroscopic actuators, fiber optic gyroscopes, on-board electronics and control software to optimize weight and inertia and significantly increase the pointing speed.

Once at its final orbital location, CSO-1 — the first satellite of the French Optical Space Component (CSO) will be used to take 3D pictures and to acquire very-high-resolution images in the visible and infrared bandwidths, day or night and in fair weather, and using a variety of imaging modes to meet as many operational requirements as possible.

For Arianespace's eleventh and final launch of the year — and the third with the Soyuz medium launcher — the company sent the CSO-1 EO satellite, intended for defense and security applications, into SSO for CNES and the DGA defense procurement agency on behalf of the French Ministry of Defense.

Designated Flight VS20, this was 305th overall launch carried out by the three members of Arianespace's launcher family (Soyuz, Ariane and Vega) from French Guiana.

This was also the 20th mission carried out by Soyuz since the launch vehicle began operating at the Guiana Space Center (CSG) in October of 2011.

With this latest launch at the service of France’s defense requirements, as well as for the capacity needs of several partner countries, Arianespace has once again guaranteed French and European autonomous access to space — a strategic priority, and a key element for sovereignty.

Nicolas Chamussy, Head of Airbus Space Systems, said thanks to the company's enduring expertise and close partnership with the French MoD since the beginning of the French Space adventure, as well as the tremendous support across industry and partners, especially Thales Alenia Space. Today, the company is able and extremely proud to provide the most modern and efficient observation capability for the safety of the nation's citizens and the sovereignty and independence of France and Europe. CSO is indeed a big step up in terms of resolution, complexity, safety of transmission, reliability and availability: only a couple of other nations can claim such a capability. For decades, Airbus, as well as other industrial partners, has been developing new technologies, instruments, platforms, secured networks, to successfully provide Helios 1, Pleiades, and Helios 2 systems for the benefit of French and European sovereignty. CSO is also the achievement of the best of Europe working together.