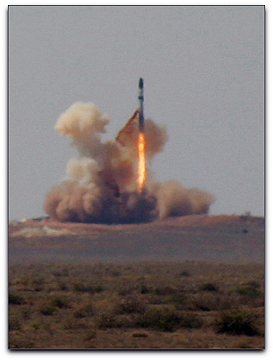 A major accomplishment to be sure, as the five-satellite RapidEye constellation was successfully launched onboard Dnepr from Baikonur, Kazakhstan at 0715 UTC today. Following this morning's launch, the spacecraft separated from the launch vehicle in slightly different orbits to allow constellation phasing and will eventually be positioned equally spaced within the same orbit about 19 minutes apart.  SSTL will control the constellation throughout the two week Launch and Early Operation Phase (LEOP) in a coordinated effort between their mission control facilities in the UK and the ground station supplied to RapidEye in Brandenburg, Germany. A team of three SSTL operators and three support staff will work with the MDA and RapidEye teams in Brandenburg, with the UK team analyzing data as it is received and on standby to react to any technical challenges. 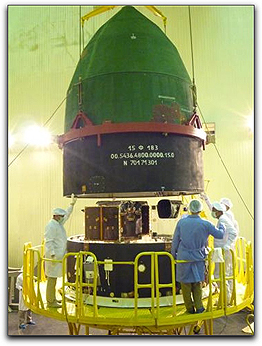 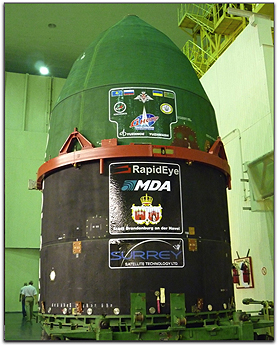 MDA is the prime contractor of the RapidEye mission that delivered this turnkey and in-orbit to RapidEye AG. MDA has direct responsibility for the mission design, the spacecraft design and the ground planning and image processing system.  The Canadian Commercial Corporation, a Government of Canada Crown corporation, is acting as the contracting agency between MDA and RapidEye AG.

Project manager Ben Stocker commented, "The simultaneous launch of five satellites is not without its challenges. Commissioning will be performed from both the RapidEye ground station in Brandenburg and the SSTL mission control center in Guildford. The five satellites will gradually disperse from each other following separation from the launch vehicle, allowing three satellites to be tracked and operated from Brandenburg with the remainder under the control of the Guildford operators. This method of operation offers the most efficient route to achieving the maximum amount of contact time per satellite during the early days of commissioning following launch. As the satellites are gradually maneuvered into position around the orbit during the commissioning phase, the Brandenburg ground station will assume full control over the constellation."

Following separation from the launch vehicle, the spacecraft activates three GaAs solar panels, generating up to 105W in sunlight. The power system will then assume active control of the battery charge management system, enabling operators to initiate communication with the five RapidEye satellites via the S-band system. Within hours the team plans to upload programs to the on-board computers that will enable early operations and checkout to commence.

The attitude control system on each spacecraft will use magnetometers, magnetorquers, sun sensors and reaction wheels to achieve 3-axis stabilization, while simultaneously using high accuracy attitude information from a star camera to finalize accurate nadir (towards Earth) pointing before proceeding with more advanced roll maneuvers.

Following LEOP, the full functionality of the satellites, including the imaging payloads built by German company Jena-Optronik GmbH, will be tested by collecting imagery over a 10-week period.  During this time MDA will demonstrate the performance of the constellation before RapidEye AG takes delivery of the system and commences commercial imaging operations.

RapidEye plans to operate the mission to deliver agricultural land information products and services such as crop monitoring and mapping, yield prediction and natural disaster assessment.