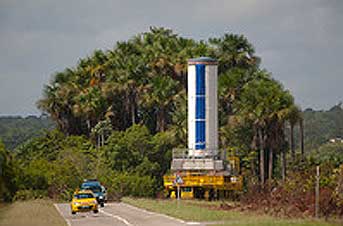 Transfer of Vega's P80 first stage to launch pad
[SatNews] Plans are underway for the first launch of its kind...

With preparations under way for the first launch of Europe's new light launcher Vega from the Guiana Space Center in French Guiana, Arianespace has signed its first commercial launch Service & Solutions contracts for Vega with the European Space Agency (ESA), on behalf of the European Union.

Arianespace will use Vega to launch two satellites in the Sentinel-2 and Sentinel-3 families, dedicated to Europe's GMES program — Global Monitoring for Environment and Security.

This program is co-funded by ESA and the European Union. The launches are scheduled for 2014-2016, from the Guiana Space Center.

The Sentinel-2 and Sentinel-3 satellites are optical observation spacecraft, operating from sun-synchronous orbit at an altitude of about 800 km. Built by Astrium and Thales Alenia Space, respectively, they will each weigh about 1,200 kg at launch.