Surrey Satellite Technology Limited (SSTL) has signed an agreement with Republic of the Philippines’ Department of Science and Technology-Advanced Science and Technology Institute (DOST-ASTI) to provide a share of the tasking and data acquisition services from NovaSAR-1, the innovative S-Band radar smallsat launched into a 580 km. SSO in September of 2018.

The agreement gives DOST ASTI tasking priorities over the Philippines and the ability to access the raw data directly from the satellite, with a license to use and share the data with their partners over an initial five year period, extendable to the actual lifespan of the satellite.

NovaSAR-1 S-band SAR image of the Cebu city area of Cebu Island and shows Mactan-Cebu International airport, boats and sea-going vessels around the shipping port, and the rugged terrain of the interior of the island.

Image is courtesy of SSTL.

Synthetic Aperture Radar (SAR) has the ability to image the Earth through cloud cover and at night, and DOST-ASTI will use data from NovaSAR-1 in support of a number of applications, including disaster monitoring, agricultural and forestry management, and coastal and maritime applications such as ship detection.

The target area for the first image acquisition was Cebu city and the nearby Mactan-Cebu International Airport. The captured image shows sea-going vessels around the shipping port together with the rugged terrain of the interior of Cebu Island.  Masbate Island in the Bicol region of the Philippines serves as the target area of the second image acquisition.  The resulting image reveals a crater site hidden by forest canopy that is not visible in optical satellite images.  Other features such as aquaculture sites along the coast and the rolling hills in the central region of the island were also captured in the image. 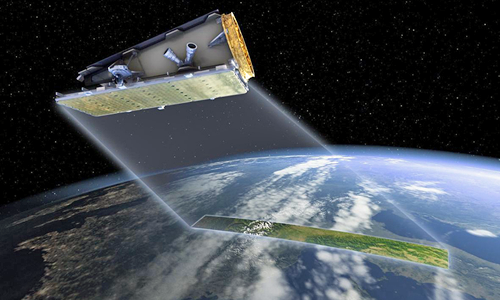 NovaSAR-1 was designed and manufactured at SSTL, with an S-band payload developed by Airbus Defence and Space in Portsmouth, UK, and an Automatic Identification Receiver supplied by Honeywell Aerospace. The SAR payload has a dedicated maritime mode designed with a very wide swath area of 400km to enable the monitoring of the marine environment and will provide direct radar ship detection information simultaneously with AIS ship tracking data to assist with the identification and tracking of sea-going vessels.

NovaSAR-1 is owned and operated by SSTL.

Andrew Cawthorne, Director of Earth Observation at SSTL, said the company is delighted to welcome DOST-ASTI colleagues to the NovaSAR-1 data team. SSTL anticipates that the Philippines will benefit greatly from NovaSAR-1 data, particularly as the country has a tropical climate with frequent cloud cover, and an extensive coastline and maritime territory.

Dr. Joel Marciano, Jr., Acting Director of DOST-ASTI, added the SAR imaging capability of NovaSAR-1 is a timely and powerful resource as the institute continues to push scientific data, computing and space technology in support of evidence-based politics and decision-making in the country.