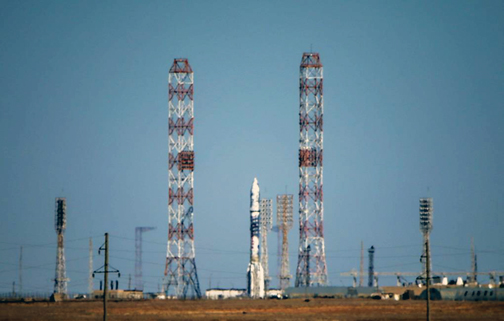 Proton-M on launch pad. Photo is courtesy of Sergei Savostyanov/TASS.

The launch of the Proton-M carrier rocket with European satellite Eutelsat-5WB and U.S. spacecraft MEV-1 was postponed as the U.S. satellite was attached incorrectly, a source in the space rocket industry told the Russian news service TASS on Wednesday.

"Specialists from Roscosmos [Russia's space corporation] and MOKB Mars [manufacturer of Briz-M control systems] have established the reason of malfunction. The problem emerged because the U.S. spacecraft was not attached correctly to the upper stage," the source said.

The source added that "the Briz-M control system for the upper stage is operating in the routine mode, adding that "it may take several days to fix fix the problem with the MEV-1 satellite."

Another source in the space rocket industry told TASS that malfunction revealed during pre-launch checks "manifests in electromagnetic interference in the Briz-M control system."

TASS does not have an official confirmation of the information provided by the sources.

The press service of Roscosmos told TASS on Tuesday that the launch of the Proton-M carrier rocket — initially planned for September 30 — was postponed to perform additional checks of the upper stage. As of this writing, no new launch date has been announced.