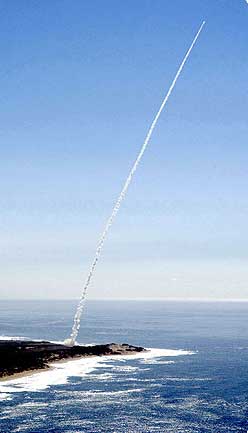 It was launched yesterday, October 28, 2010, from the Pacific Missile Range Facility on Kauai, Hawaii and flew on a northwestern trajectory.  The MRT vehicle was successfully intercepted by the Japanese Navy's Standard Missile-3 (SM-3) interceptor system before it reentered the Earth's atmosphere.  Yesterday's launch was the ninth overall mission for Orbital's MRT program, all of which have been successful.  Of the nine missions, seven were launched in support of the Aegis BMD test program, including four for the Japanese test program.

Orbital originally developed the MRT multiple launch mode target vehicle over a two-year period under contract to the U.S. Army Space and Missile Defense Command (USASMDC). It was developed to meet demanding specifications that require launch capability from air-, ground- or sea-based platforms. Its first flight occurred in April 2005 and demonstrated the air-launch mission capability. For that mission, the target vehicle was extracted and descended from a C-17 cargo aircraft via a parachute system, an operational methodology necessary to support U.S. Army Theater High Altitude Area Defense (THAAD) tests.  The air-launch demonstration was then followed by four consecutive ground-launch missions for Aegis BMD tests, an air-launch mission in June 2008 for THAAD, followed by three more ground-launch missions for Aegis BMD.  A launch from a sea-based platform has not yet been ordered by the customer.