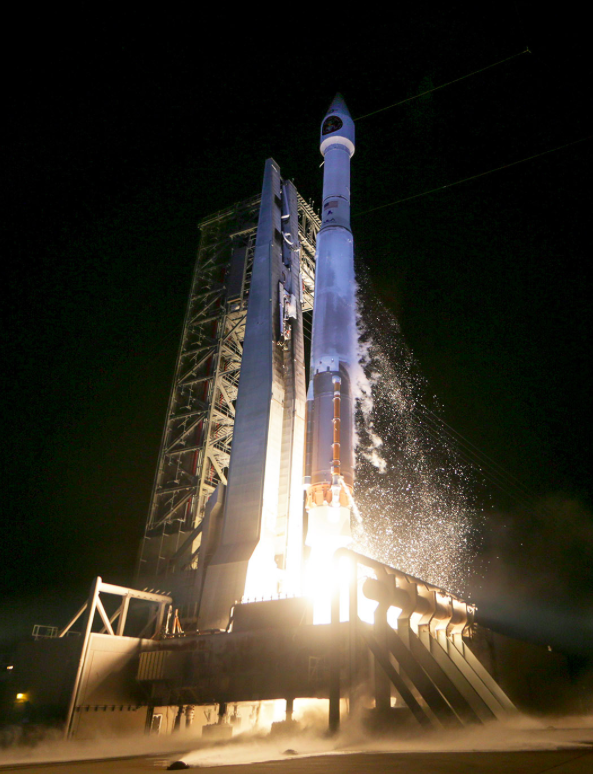 ULA had a scrub yesterday but today... success with the launch of USAF's SBIRS GEO Flight 3 satellite.

“ULA is proud to deliver this critical satellite which will improve surveillance capabilities for our national decision makers,” said Laura Maginnis, ULA vice president of Government Satellite Launch. “I can’t think of a better way to kick off the new year.”

This mission was launched aboard an Atlas V Evolved Expendable Launch Vehicle (EELV) 401 configuration vehicle, which includes a 4-meter diameter large payload fairing (LPF). The Atlas V booster propulsion for this mission was powered by the RD AMROSS RD-180 engine, and the Centaur upper stage was powered by the Aerojet Rocketdyne RL10C engine.“The Atlas V 401 configuration has become the workhorse of the Atlas V fleet, delivering half of all Atlas V missions to date” said Maginnis. “ULA understands that even with the most reliable launch vehicles, our sustained mission success is only made possible with seamless inte

This is ULA’s first launch of 11 planned launches in 2017 and the 116th successful launch since the company was formed in December 2006.

ULA's next east coast launch is the Delta IV WGS-9 satellite for the U.S. Air Force. The launch is scheduled for March 8 from Space Launch Complex-37 at Cape Canaveral Air Force Station, Fla.

With more than a century of combined heritage, United Launch Alliance is the nation’s most experienced and reliable launch service provider. ULA has successfully delivered more than 115 satellites to orbit that aid meteorologists in tracking severe weather, unlock the mysteries of our solar system provide critical capabilities for troops in the field, and enable personal device-based GPS navigation and unlock the mysteries of our solar system.