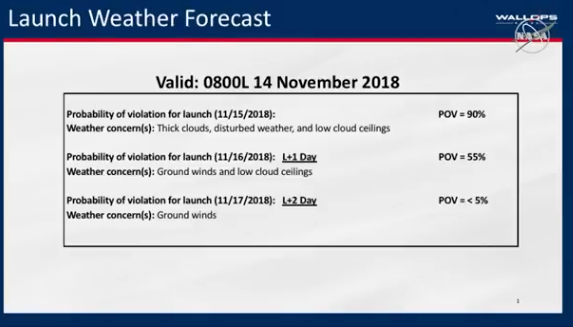 The resupply mission originally scheduled for Thursday, November 15, has now been moved out due to weather.

UPDATE, Nov 14:  The launch was delayed one day due to weather.  It is now scheduled for Nov 16 at 4:23 am ET.  Presumably the post-launch press conference will follow at 7:00 am ET that day, although it was not specifically stated.

Launch is scheduled for 4:49 am ET from Wallops Flight Facility, Virginia. 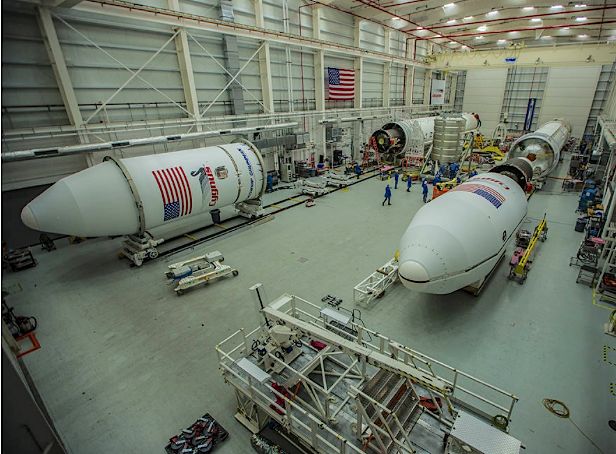 Northrop Grumman’s Antares rocket for its 10th commercial resupply mission to the International Space Station is seen on the left Nov. 4, 2018, in the Horizontal Integration Facility at NASA’s Wallops Flight Facility on Virginia's Eastern Shore. The CRS-10 Cygnus spacecraft is shown in the middle of the facility, and the Antares CRS-11 rocket scheduled to launch in spring 2019 is on the right. Credits: NASA/Patrick Black

Loaded with 7,500 pounds of research, crew supplies and hardware, this is the tenth commercial resupply mission for Northrop Grumman. About 70 minutes after launch, an automated command will initiate deployment of the spacecraft’s solar arrays. Full deployment will take approximately 30 minutes.

The Cygnus spacecraft is scheduled to remain at the space station until February 12, 2019, when it will depart, taking with it several tons of trash, and deploy several CubeSats before its fiery reentry into Earth’s atmosphere.