Successful Launch of the First Six OneWeb Satellites by Arianespace

Arianespace played a significant role in improving global connectivity with the Soyuz launch that deployed the initial six satellites in OneWeb’s constellation, which will provide affordable high-speed internet access for users around the world. 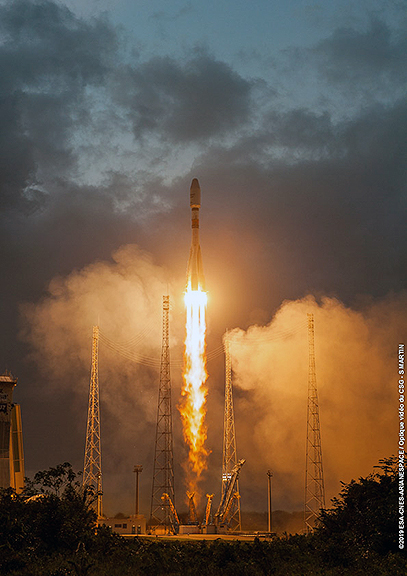 The cluster of spacecraft — produced by the OneWeb Satellites joint venture of OneWeb and Airbus — was successfully deployed into a circular LEO on Arianespace’s first Soyuz mission of 2019 (and the launch services company’s second mission overall for this year).

Lifting off from the Spaceport precisely at the scheduled 6:37 p.m. launch time in French Guiana, the workhorse medium-lift vehicle delivered its payload during a flight lasting 1 hour and 22 minutes. Total payload lift performance was estimated at 1,945.2 kg.

After an initial powered phase of Soyuz’ three lower stages, the flight — designated VS21 in Arianespace’s numbering system —– included two burns of the Fregat upper stage to place its passengers at their targeted deployment point. 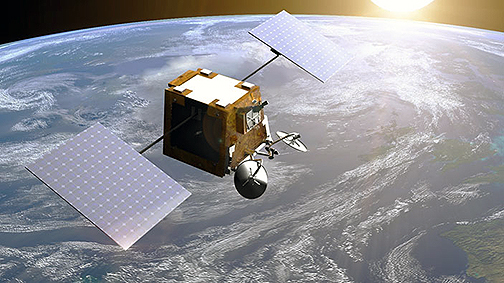 Artistic rendition of a OneWeb satellite.

OneWeb is building the world’s largest and highest throughput satellite system to connect everyone, everywhere — by land, air, sea with a vision to bridge the digital divide once and for all. The first six spacecraft will operate at an altitude of 1,200 km. in a constellation that will deliver extremely low latency for customers and provide communications access to the entire world with fiber-quality internet connectivity.

The initial constellation will be compromised of approximately 650 satellites and will scale to more than 900 spacecraft as it grows to meet demand around the world. OneWeb signed a contract with Arianespace in 2015 for a total of 21 Soyuz flights from three launch bases (the Spaceport in French Guiana; Baikonur Cosmodrome in Kazakhstan and Vostochny in Russia), to be performed through 2020.

The OneWeb constellation will support a wide range of markets, including aeronautics, maritime, backhaul services, community WiFi, emergency response services and more. The operator also is focused on connecting unconnected schools and working to bridge the digital divide for people everywhere.

This launch success marked Soyuz’ 21st flight from the Spaceport since this vehicle’s 2011 introduction at French Guiana, as well as the second Arianespace mission from this equatorial launch site in 2019 — following the heavy-lift Ariane 5 flight that orbited Saudi Geostationary Satellite 1/Hellas Sat 4 and GSAT-31 on February 5.

With a busy launch schedule in 2019, Arianespace targets up to 12 missions from the Spaceport with Ariane 5, Soyuz and the light-lift Vega.

Arianespace CEO Stéphane Israël congratulated OneWeb in his post-launch comments from the Spaceport and underscored the importance of today’s Soyuz success for both companies and said this initial mission makes this ambitious partnership —– built around the launch of more than 600 OneWeb satellite — a reality. He also announced that following thi’s launch success, Arianespace and OneWeb have reached an agreement that completes the current launch services order. This agreement is for OneWeb’s use of Ariane 6’s inaugural flight in its A62 version, as well as options for two future Ariane 6 missions.

Speaking at the Spaceport, OneWeb CEO Adrian Steckel noted the group effort of many participants, including Arianespace, that led to the launch and stated that the notion of doing good is deep in the foundations of the company — and OneWeb is looking forward to doing their part in connecting the world, together with the firm's partners.

Nicolas Chamussy, EVP— Space Systems at Airbus Defence and Space, acknowledged Arianespace’s important role in this first step of establishing the OneWeb constellation and added the company thanks Arianespace for having delivered spot-on, providing world-class access to space.