The Lucy mission is scheduled to launch in October 2021 from Space Launch Complex-41 at Cape Canaveral Air Force Station in Florida. This mission will launch aboard an Atlas V 401 configuration rocket. Atlas V has a strong history in launching planetary missions for NASA including Mars Science Lab; New Horizons; OSIRIS-REx, the first U.S. mission to return asteroid samples to Earth; and the Solar Dynamics Observatory to study the sun. 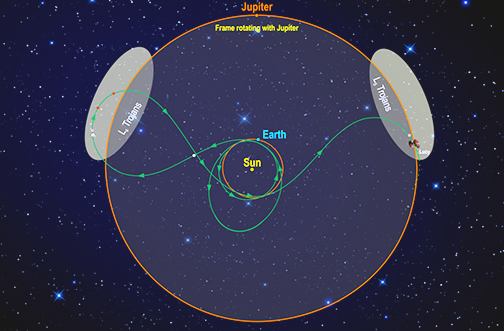 This diagram illustrates Lucy's orbital path. The spacecraft’s path (green) is shown in a frame of reference where Jupiter remains stationary, giving the trajectory its pretzel-like shape. After launch in October 2021, Lucy has two close Earth flybys before encountering its Trojan targets. In the L4 cloud Lucy will fly by (3548) Eurybates (white), (15094) Polymele (pink), (11351) Leucus (red), and (21900) Orus (red) from 2027-2028. After diving past Earth again Lucy will visit the L5 cloud and encounter the (617) Patroclus-Menoetius binary (pink) in 2033. As a bonus, in 2025 on the way to the L4, Lucy flies by a small Main Belt asteroid, (52246) Donaldjohanson (white), named for the discoverer of the Lucy fossil. After flying by the Patroclus-Menoetius binary in 2033, Lucy will continue cycling between the two Trojan clouds every six years.
Illustration is courtesy of Southwest Research Institute.

Jupiter's swarms of Trojan asteroids may be remnants of the primordial material that formed the outer planets, and serve as time capsules from the birth of our solar system more than four billion years ago. Lucy will be the first space mission to study the Trojans. The mission takes its name from the fossilized human ancestor (named “Lucy” by her discoverers) whose skeleton provided unique insight into humanity's evolution. Lucy will complete a 12 year journey to seven different asteroids.

Tory Bruno, ULA’s President and CEO said the company could not be more pleased that NASA has selected ULA to launch this amazing planetary science mission. This mission has a once-in-a-lifetime planetary launch window and Atlas V’s world-leading schedule certainty, coupled with our reliability and performance, provided the optimal vehicle for this mission. ULA's Atlas V rocket has launched 79 times and has achieved 100 percent mission success.