This ambitious plan is beginning to take form, now that the three companies have been named to begin work on building the 900 satellites.

OneWeb Satellites, a joint venture equally owned by Airbus Defence and Space and OneWeb, has selected the first three top-tier subcontractors. The supply contracts have been signed with:

To equip each of the 900 satellites forming the OneWeb fleet, MDA will provide on board antenna systems, Sodern has customized to constellation its star tracker technology, while Teledyne Defence has designed communications repeater equipment derived from its high volume manufacturing heritage. 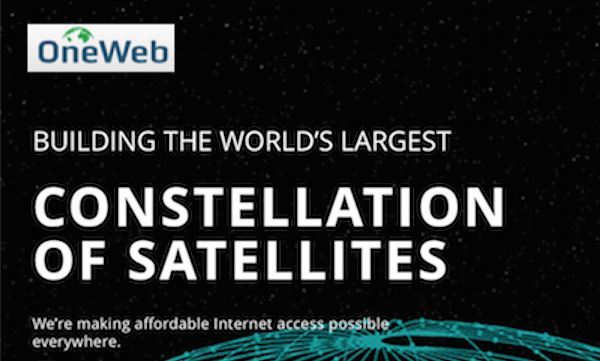 With this milestone OneWeb Satellites is pursuing its industrial development and rapidly moving forward. In April it was announced that Florida is the site for its high volume satellite manufacturing factory.

The space segment of OneWeb will initially comprise a constellation of 648 operational satellites and replacement satellites, all of which will be identical. Each satellite will weigh approximately 150 kg and will operate in low Earth orbit. Arianespace and Virgin Galactic will begin launching the spacecraft in 2018 after which the satellites will be moved to their operational orbits using electrical propulsion.

OneWeb Satellites was set up following the selection in June 2015 of Airbus Defence and Space as the industrial partner of OneWeb to design and build OneWeb’s satellites. The constellation to be operated by OneWeb will provide high-speed Internet services with global coverage. The joint venture will also be able to produce satellites, platforms or equipment to be marketed by Airbus Defence and Space for the benefit of other operators of future constellations.