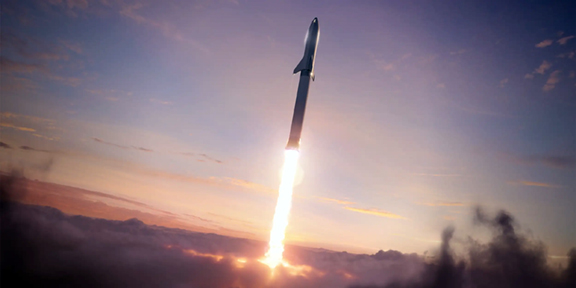 Image is courtesy of SpaceX.

Journalist Chris Forrester, filing these stories at the Advanced Television infosite, has reported that Elon Musk unveiled his Starship Mk 1 ‘Big Falcon Rocket’ at its South Texas assembly facility — Musk said that test flight will start in a month or two and be ready to reach orbit within six months.

This SpaceX prototype rocket is a beast, standing some 50 metres high, and was in the background as Musk addressed press, local VIPs and staff.

That debut flight will take the BFR to some 65,000 ft. (about 20 kms.) and then bring it back to Earth. Musk told those present that the orbital flight could happen with a Mk III rocket and that this particular version would start being built in a few weeks at the Boca Chica, South Texas, site. An Mk II version is currently under construction at Musk’s facility near Cape Canaveral.

These debut test flights will all be unmanned; however, Musk added that manned rockets could happen later next year although would be subject to licensing by the Federal Aviation Administration. In typical fashion, Musk Tweeted that his Starship project will be the most powerful rocket in history and that the unveiling was taking place exactly 11 years since a SpaceX rocket first reached orbit. 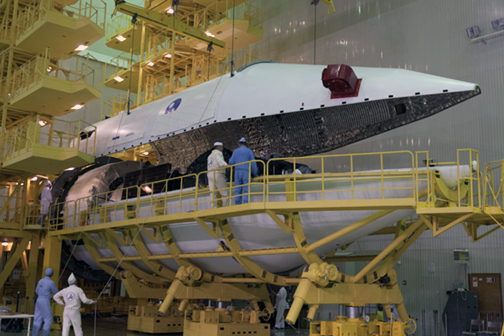 Chris is also reporting that last week an inspection of the two satellites aboard an International Launch Services (ILS) rocket had not been correctly installed. The source of this information was from Russian news agency TASS, which claimed that one of the rocket’s satellites “was incorrectly attached” within the rocket’s fairing. The report stressed “if the reports are to be believed” and seemingly, they were not accurate.

The Proton rocket is carrying two satellites: Eutelsat 5WB and Northrop Grumman’s MEV-1 space tug, both scheduled to be launched on a Russian Proton rocket on September 30th.

Kyle Pysher, CEO at ILS, stated that the TASS claim is “unsubstantiated” and the delay to the launch is due to an electrical fault. Kyle said that the issue that resulted in the postponement was actually found during electrical testing of the upper stage control system. The issue is currently being investigated by [rocket builder] Khrunichev and going through a rigorous review process with the appropriate Russian independent quality assessment teams. Once the review process is completed and all required parties confirm the issue is understood, and any required corrective actions completed, the company will announce a new launch date. Currently, both the MEV-1 and Eutelsat E5WB spacecraft are healthy within the payload fairing.