[Satnews] Following the first impressive images from Sentinel-3A’s Ocean and Land Color Instrument, this latest Copernicus satellite is now showing us how another of its instruments, an altimeter, will track sea level change. 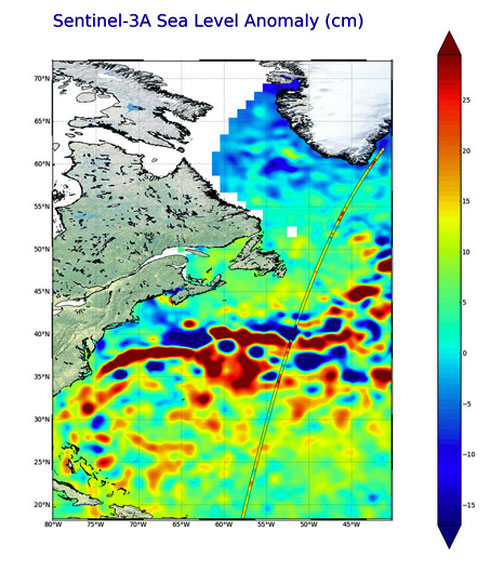 Sea level track from Sentinel-3A This is the first track measured by Sentinel-3A’s Synthetic Aperture Radar Altimeter immediately after it was switched on. The instrument will be a vital tool for closely monitoring changes in surface ocean waters, sea-state and sea-ice thickness. The track, which captures features in the Gulf Stream current, compares well to the background data that comprises near-realtime data from the CryoSat, Jason-2 and Altika satellites.Image credit: Copernicus data (2016)/CMEMS.

Just after the Synthetic Aperture Radar Altimeter (SRAL) instrument was turned on, it traced the height of the sea surface over a stretch of the North Atlantic, some of the most dynamic ocean waters in the world. Showing features relating to the Gulf Stream, the track compares very well with the background map of sea surface height. The map, produced by the Copernicus Marine Environment Monitoring Service, comprises near-realtime data for one day from the CryoSat, Jason-2 and SARAL/AltiKa satellites. SRAL has been designed to deliver accurate measurements of sea surface height, significant wave height and surface wind speeds over the world’s oceans for Copernicus ocean forecasting systems and for monitoring sea level change.

On average, the global sea level has been rising at a rate of just over 3 mm/yr over the last 20 years; however, this figure varies considerably around the world. The Sentinel-3 mission will offer valuable insight into these important variations.

Pierre-Yves Le Traon from Mercator Ocean said, “These first results are very promising and illustrate the great potential Sentinel-3 has for the Copernicus Marine Environment Monitoring Service. Sea surface height data from the satellite’s altimeter will, for example, significantly improve our capability to analyze and forecast ocean currents. This is essential for the applications we serve such as marine safety, ship routing and predicting the fate of marine pollution events."

Another set of data show how SRAL will be used to map ‘significant wave height’, which again is important information needed for ship safety. It will also provide accurate topography measurements over sea ice, ice sheets, rivers and lakes. 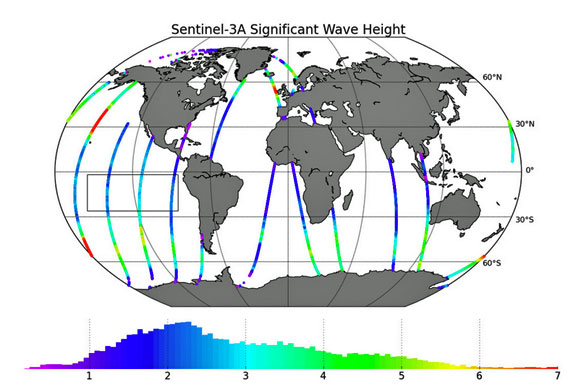 SRAL is based on heritage from the CryoSat and Jason missions. This first image is in low-resolution mode but it will provide measurements at a resolution of approximately 300 m in the along-track direction after processing. It will be the first satellite altimeter to provide 100 percent coverage over all of Earth’s surfaces in synthetic aperture radar mode, directly resulting from experience with CryoSat .

Sentinel-3A has shown that these first two instruments are working well—now engineers and scientists are expecting the first data from its radiometer, which should come through in the next couple of days.