Don't know if any penguins were involved in the successful experiment that Kepler Communications demonstrated delivering over 100Mbps connectivity service in the Arctic region to the German icebreaker Polarstern.

The vessel is located around 85 degrees N and is the home to the MOSAiC scientific expedition. The demonstration marks the first time in history that the central Arctic is successfully connected through a high-bandwidth satellite network.

Kepler’s two polar-orbiting satellites are being used to transfer data for scientists taking part in MOSAiC, the most extensive research expedition ever to the North Pole. MOSAiC is an international expedition consisting of hundreds of scientists and operations crew, which will remain locked into the Arctic ice sheet to study the environment. The team will spend the next 12 months drifting along with the ice sheet, with the purpose of the mission being to take the closest look ever at the effects of climate change on the Arctic.

Kepler has provided the Polarstern is equipped witthe world’s only high-bandwidth satellite data link delivered from low-Earth orbit (LEO) that is available in the Arctic. With the vessel operating well outside the range of traditional high-throughput satellites, Kepler is providing 100x higher data speeds, when the satellite passes the vessel than would be otherwise available to the ship. This improved data transfer capability means scientists can share large data files between ship and shore, improving the ability to share, analyze, and disseminate information. 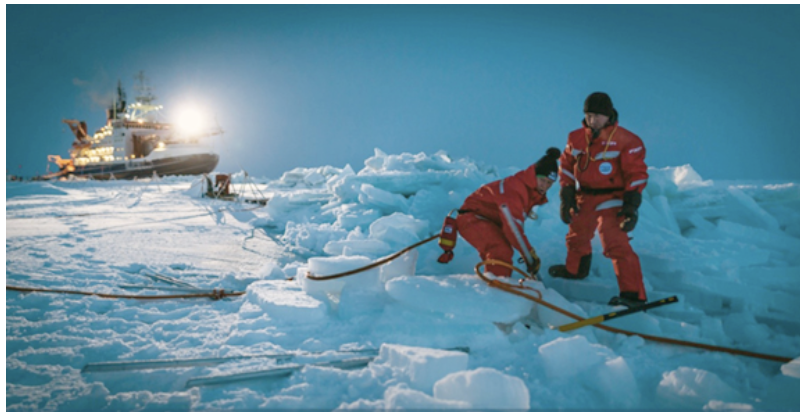 MOSAiC scientists setting up camp in the North Pole.
Photo by Stephan Hendricks.

Mina Mitry, CEO at Kepler said that their Global Data Service provides a cost-effective means to transfer large data volumes that will be gathered over the course of MOSAiC. Rather than only storing data locally and analyzing once physical storage can be sent back with supply vessels, they are giving scientists the ability to continuously transfer test and housekeeping data sets over their unique LEO satellite network.

Kepler’s Global Data Service™ will save time, money and, most importantly, improve the ability for MOSAiC scientists to carry out their critical mission of studying climate change.

In charge of MOSAiC’s logistics is the Alfred Wegener Institute Helmholtz Centre for Polar and Marine Research (AWI), from Germany. They are responsible for leading this international expedition that involves the joint efforts of 19 countries around the world. With over USD 158 million in funding, the most advanced technology on a research icebreaker, and an astonishing quantity of planning and logistics, MOSAiC is the largest expedition to the North Pole ever in history.

Professor Markus Rex, MOSAiC project leader and atmospheric scientist at the Alfred Wegener Institute in Potsdam added that the high polar regions are the last frontiers of the globe where high bandwidth data connections could not be established so far. Kepler's new Global Data Service now enables them to send back bulk data, including key data files for monitoring the status of instruments together with experts at home. This will contribute to the success of MOSAiC.

The MOSAiC expedition began when the Polarstern set sail from Norway this past September and will continue for more than a year. Findings from the mission will help better assess the future of Earth’s climate, and provide valuable information to help fight climate change.

Kepler is the world's only provider of high-bandwidth satellite services in the poles. Aboard the Polarstern, Kepler has demonstrated data rates of 38 Mbps downlink and 120 Mbps uplink to a 2.4m Ku-band VSAT (Very Small Aperture Terminal).