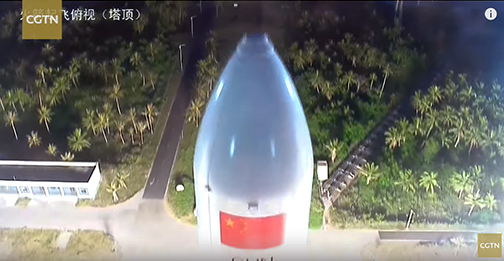 The liftoff of China's Long March-5 rocket that ultimately malfunctioned at approximately six minutes after launch.
Photo is courtesy of CGTN.

Referring to a Xinhua news service article, China plans to launch the third one of the nation's large carrier rockets — the Long March-5  — in July, this according to Yang Baohua, VP of the China Aerospace Science and Technology Corporation (CASC) on Tuesday.

The second Long March-5 rocket was launched from the Wenchang Space Launch Center in the southern province of Hainan on July 2, 2017; however, a malfunction occurred less than six minutes after liftoff.

Yang said at a press conference that the cause of the failure has been found. If the third flight is successful, the fourth Long March-5 carrier rocket will be tasked to send the Chang'e-5 lunar probe to the moon to bring lunar samples back to Earth by the close of 2019.