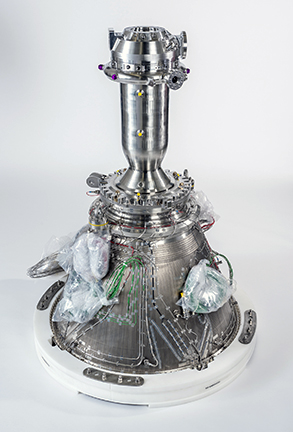 The ETID (Expander-cycle Technology Integrated Demonstrator) demonstrator is being used to develop thrust chamber components and subsystems and to test technologies for the engines of the future.

Through testing carried out from June 2018 to March 2019 in Lampoldshausen, Germany, the ETID demonstrator validated 14 new components, technological building blocks now available for developing a future upper stage rocket engine. With ETID and the Prometheus demonstrator, ArianeGroup is developing innovative technologies and manufacturing processes to significantly enhance competitiveness of the Ariane 6 liquid propellant engines as of 2023 and to develop new, very low-cost engines for future European launchers from 2030.

Program validation tests for ETID, which are designed to develop new technologies for upper stage rocket engines, were completed on March 22, 2019, with the successful hot-fire testing campaign. A total of 14 thrust chamber and valve components developed by ArianeGroup and its European partners have been undergoing testing at the German Aerospace Center, DLR, in Lampoldshausen, Germany, since June 2018.

Over 23 test days, four different thrust chamber configurations were tested, with an overall runtime of more than 2,700 seconds.

The ETID project was carried out within ESA’s Future Launcher Preparatory Program. The European partner organizations which are making a significant contribution to the ETID program — GKN Aerospace (Sweden), Safran Aero Boosters (Belgium), Aerospace Propulsion Products (Netherlands), and Carinthian Tech Research (Austria), as well as DLR Institute of Space Propulsion — celebrated this success in Lampoldshausen along with representatives from ArianeGroup, the project lead contractor.

The purpose of the ETID demonstrator is to develop thrust chamber components and subsystems to enable even more cost-efficient European space launcher production. One of the single-piece, full-scale 3D-printed injector heads developed by ArianeGroup was deployed on the demonstrator, a 10-ton class real-size thrust chamber. This injector head will in the future replace conventional injector heads, which are made up of over 400 individual parts. A cost-effective combustion chamber made of copper and various multiple igniters also underwent testing in space-representative conditions.

The success of these tests will support the decisions to be made at the European Space Agency (ESA) Ministerial Conference in Seville in November this year, for continued development of engines to power the future Ariane 6 versions.

Prometheus and ETID are precursors of future European space launcher engines for the 2030 time-frame. The innovative technologies and industrial processes developed under these demonstrator programs will also contribute to the propulsion systems used on Ariane 6 evolutions.

The Prometheus program design review was successfully completed on February 1, 2019, at ArianeGroup’s Vernon site in France. The industrialization review is scheduled for summer 2019. These are conducted by ArianeGroup teams in Ottobrunn, Germany, and Vernon, along with those from ESA, with the support of specialists from the French and German space agencies, CNES and DLR.

André-Hubert Roussel, ArianeGroup CEO, noted that it is crucial that the company is already working to prepare the technologies that will be used on the launchers from 2030, and the progress made in parallel with the development of the Prometheus very low-cost engine is taking us forward in this direction. With the success of the ETID tests, ArianeGroup and the European Space Agency (ESA), supported by the German space agency DLR, have reached a further important milestone in the development of innovative technologies and thus the development of ever more competitive European space launchers.