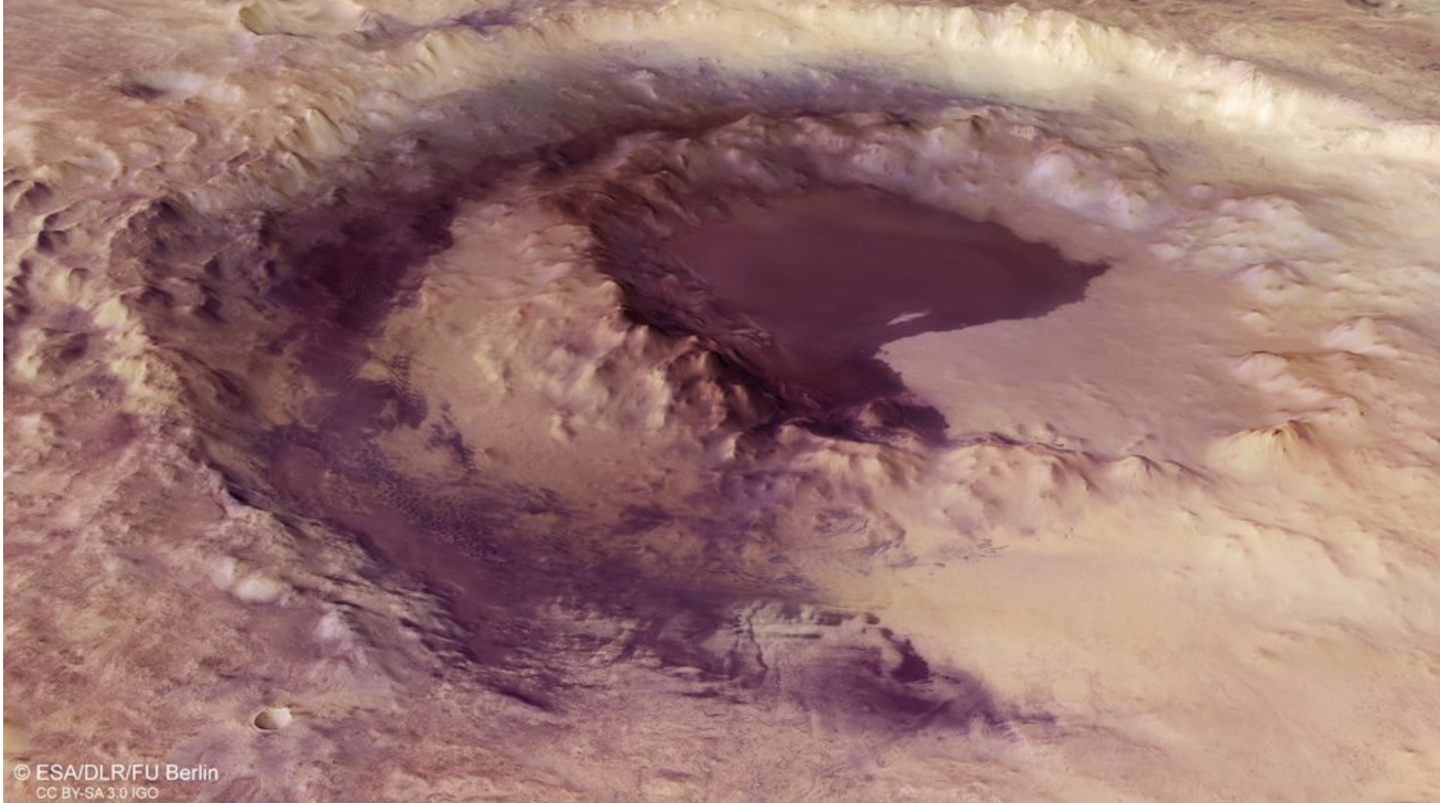 This image from ESA’s Mars Express shows Lowell crater on Mars. This oblique perspective view was generated using a digital terrain model and Mars Express data gathered during orbits 2640, 2662, 2684, 16895, 18910, 18977, and 18984 by the spacecraft’s High Resolution Stereo Camera (HRSC). The ground resolution is approximately 50 m/pixel and the images cover a region from 274.5° to 283° East and 49° to 54.5° South. This image was created using data from the nadir and colour channels of the HRSC. The nadir channel is aligned perpendicular to the surface of Mars, as if looking straight down at the surface. More information Credits: ESA/DLR/FU Berlin, CC BY-SA 3.0 IGO

High definition images reveal the details of the Lowell Crater to a degree never seen before.

The huge dent in the red planet is believed to be around 3.9 million years old and is the result of a massive asteroid collision.

The crater is named after U.S. mathematician, astronomer and writer Percival Lowell, the founder of the Lowell Observatory in Arizona in 1894.

The high resolution images of the crater were captured by the ESA using seven different Mars Express satellite fly-pasts.

Images from each of these seven attempts were carefully merged into one stunning photograph.

The Lowell Crater is surrounded by mountains which were created when a large asteroid pummelled into the region of the red planet known as Aonia Terra.

The ESA said: “This so-called ‘peak ring’ is thought to have formed along with the crater.

“The immense energy of a large impact event causes material to surge upwards before collapsing down again, forming the kind of complex morphology seen here, with an irregular mountain range encircling the crater’s centre, inside the main crater rim.”

Scientists have compared the Lowell Crater to the Chicxulub crater.

The Mexican site is known for an asteroid believed to have wiped out the dinosaurs 66 million years ago.

The ESA said: “Studies and simulations of Chicxulub, which is around the same size as Lowell crater, have shown a peak ring that formed as a huge, unstable central peak later collapsed.”

While Dr Lowell was the first person to popularise the theory that Mars was once criss-crossed by canals, the idea was first proposed by Italian scientist Giovanni Schiaparelli, who noted the presence of dark lines on Mars in observations from the 1870s.

However, many years later, experts fobbed the theory off, suggesting the ‘canals’ were just optical illusions and not a viable claim.