SpaceX...Thaicom 6 Is Eighth Aboard Ninth (Launch) 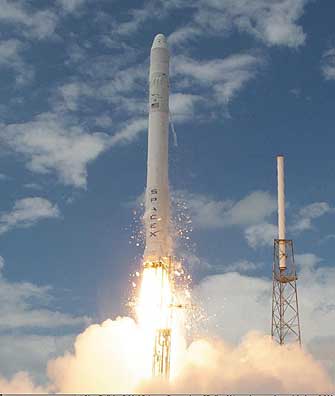 Thai satellite company THAICOM Plc. (SET Index: THCOM) has chosen Space Exploration Technologies (SpaceX) to launch the new Thaicom 6 telecommunications satellite into a geosynchronous transfer orbit (GTO) from its Cape Canaveral launch site in the second quarter of 2013. The contract brings another international launch to the United States to fly with SpaceX. Thaicom is the eighth non-U.S. customer manifested for upcoming flights aboard the Falcon 9.

“This deal highlights the confidence that satellite operators have in SpaceX capabilities, and is the latest example of the effect SpaceX is having on the international commercial launch market,” said Elon Musk, SpaceX chief executive officer (CEO) and chief technical officer (CTO). “Asia is a critical market and SpaceX is honored to support its growing launch needs with a reliable U.S.-based solution.”

The Thaicom 6 satellite is designed to serve the growing satellite television market in South and South-East Asia, as well as Southern Africa. Built by Orbital Sciences Corporation of Dulles, Virginia , and expected to weigh about 3,200 kilograms at launch, the satellite will operate from 78.5 degrees east and carry 18 C-band and eight Ku-band transponders. Thaicom 6 is planned to be in service by the middle of 2013.

Arak Chonlatanon, CEO of Thaicom Plc., said, “The Falcon 9 will serve our unique needs at Thaicom. This dedicated launch vehicle is both cost-effective and best-matched to our requirements. We look forward to working closely with the SpaceX team to ensure that the Thaicom 6 satellite will be successfully launched.”