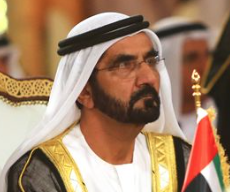 The new Mohammed bin Rashid Space center will conduct outer space research and support the UAE’s drive to advance in the sector, a statement said. It will also help build the country’s capabilities in outer space exploration.  The center will oversee all preparations for the UAE’s Mars probe, which the country plans to carry out by 2021.

It will also work on other technologically advanced projects assigned by the authorities.  The Emirates Institution for Advanced Science and Technology (EIAST) will be affiliated to the new center.

Last year, the UAE became the first Arab country to launch an outer space exploration mission when it announced a planned unmanned probe to the red planet in 2021.  The probe will take nine-months to complete the journey, which spans more than 60 million kilometers.

The mission, led by Emiratis, will make the UAE one of nine countries with space programs to explore Mars, and will also coincide with the 50th anniversary of the country’s formation.

The Emirates has taken a number of steps to prepare for its first outer space mission.

Soon after the launch of the Mars Mission, it launched the UAE Space Agency to supervise the mission and coordinate other space projects. The agency has since inked a number of research partnerships with other groups, including NASA, to build its expertise.

UAE investments in space technologies currently exceed Dhs20 billion, and the Mars project will establish the sector as a key component of the national economy in the future, officials said. Sheikh Mohammed recently launched a Twitter campaign for residents to find an Arabic name for the country’s mission to Mars.