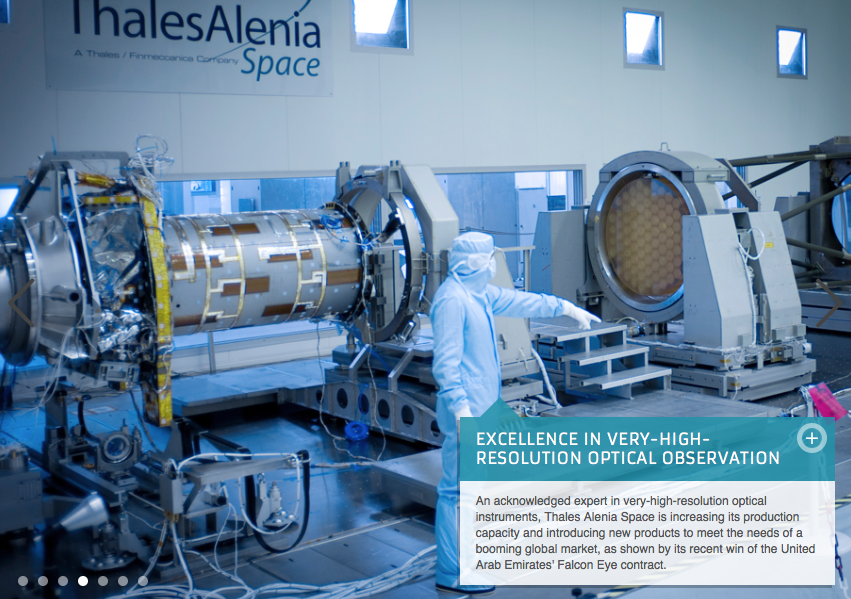 This space technology center clearly reflects Thales Alenia Space's strategy of being a favored partner in the development of the Brazilian space industry, and is in line with the measures implemented within the scope of the contract for the SGDC dual use telecommunications satellite, won by Thales Alenia Space in 2013. It is ideally located in a technology park that already hosts the company Visiona, and is not far from Embraer and the INPE, Brazil's national space research center. Initially, the Space Technology Center will develop technology partnerships with local Brazilian space companies.

Omnisys will also contribute its skills, enabling the center to develop its engineering and design activities for space applications in upcoming contracts. Looking further ahead, the Space Technology Center could also host a data analysis center associated with the European program Copernicus, enabling Brazil to more clearly define its satellite requirements for environmental management, with a special focus on the essential Amazon region.

Since signing the SGDC satellite contract, Thales Alenia Space has already implemented a number of concrete actions concerning the development of a space partnership with Brazil. In particular, The company's Space Institute aims to help Brazilian universities establish a master's in space systems engineering, has set up a satellite-oriented university chair, and has coordinated and financed various doctoral theses and joint studies. Furthermore, within the scope of the Technology Absorption Plan, about 40 Brazilian engineers are learning more about space technologies at Thales Alenia Space's French facilities.

In 2013, TAS had signed a Memorandum of Understanding (MOU) with the Brazilian space agency AEB to be a primary partner in the development of a Brazilian space industry. Thales Alenia Space and AEB have now signed the Definitive Transfer of Technology Agreement, which further specifies the general ideas in the original MOU, the subjects that have been chosen, the timetable and the term and conditions for application. A framework tripartite Thales Alenia Space/AEB/(Brazilian company) contract has also been finalized, enabling the rapid implementation, on demand, of technology transfer contracts.

"With the inauguration of this center, Thales Alenia Space, along with Omnisys, pursues its commitment as a major industrial partner in the development of Brazil's own space industry," said Joel Chenet, Senior Vice President, Thales Alenia Space Brazil. "All of our actions are designed to enable the Brazilian space industry to manufacture its own low-orbit satellite within three to five years."

“Brazil is one of the key countries for Thales as part of our international strategy of sustainable growth focused on emerging markets. The new unit in São José dos Campos is our sixth in the country and reinforces our local strategy to transfer technologies, establish a local industrial base and develop local partnerships. As one of Brazil’s most innovative companies and Thales’s pillar in the country, Omnisys is a leader in the air traffic management radars market, a key partner of the Brazilian Navy and also a key player in the Space industry,” added Ruben Lazo, Vice President for Thales in Latin America.