Airbus Defence And Space’s Gaia Maps 1.6 Billion Stars And Can Pick Out A Human Hair At 435 Miles 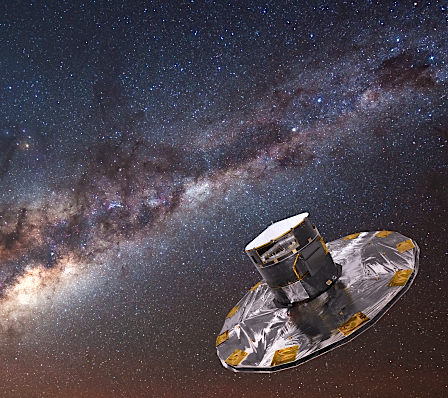 Artist's impression of the Gaia spacecraft, with the Milky Way in the background.

Airbus Defence and Space's Gaia spacecraft has been super busy since it was first launched on a Soyuz rocket in December of 2013—mapping 1.6 billion stars, and Gaia has already compiled data on the positions and intensities of 1.1 billion of those stars. As the spacecraft spins it tracks huge numbers of stars simultaneously while maintaining near-perfect control of its attitude in space. Its micro-propulsion system can make precise adjustments using its thrusters to keep the satellite correctly aligned—it would need 1,000 of these micro-thrusters on Earth to lift a single sheet of paper.

The success of this mission is reported to be:

Its mission is to carry out a far reaching census of the Milky Way galaxy.

At the heart of spacecraft is the video processing unit which has more processing power than any other ESA spacecraft. Gaia’s data is received at ESA’s 35 meter diameter radio dishes in Cebreros, Spain, and New Norcia, Australia.

Nicolas Chamussy, Head of Space Systems at Airbus Defence and Space declared, “Today’s results will open up a new era in astronomy—a huge increase in precise data that will inform astronomers about the dynamics and origin of our galaxy and about hundreds of thousands of new objects in our solar system and beyond. All the engineers and technicians who designed and built Gaia at Airbus Defence and Space can be extremely proud.”

This release of data from Gaia builds upon and dramatically improves upon the results of ESA’s first astrometry mission, Hipparcos, launched in 1989, and also developed by Airbus Defence and Space.