Airbus Set to Deliver the ESM for NASA's Orion Spacecraft

Airbus will deliver the first European Service Module (ESM) for NASA’s Orion spacecraft from the company's aerospace site in Bremen, Germany on November 5, 2018.

An Antonov cargo aircraft will fly the ESM to NASA’s Kennedy Space Center in Florida, USA. This is the result of four years of development and construction and represents the achievement of a key milestone in the project. ESA selected Airbus as the prime contractor for the development and manufacturing of the first ESM in November of 2014. 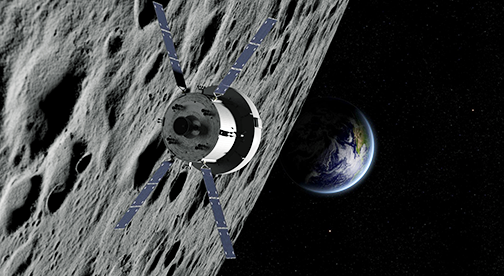 Artistic rendition of the Orion EM1 above the moon.

The ESM is a key element of Orion, the next-generation spacecraft that will transport astronauts beyond low Earth orbit for the first time since the end of the Apollo program in the 1970s. The module provides propulsion, power and thermal control and will supply astronauts with water and oxygen on future missions. The ESM is installed underneath the crew module.

The launch of the Orion spacecraft with NASA’s new Space Launch System rocket is known as Exploration Mission-1 and is scheduled for 2020. This mission will be uncrewed and will take the spacecraft more than 64,000 kilometres beyond the Moon in order to demonstrate its capabilities. The first human spaceflight mission, Exploration Mission-2, is planned for 2022. 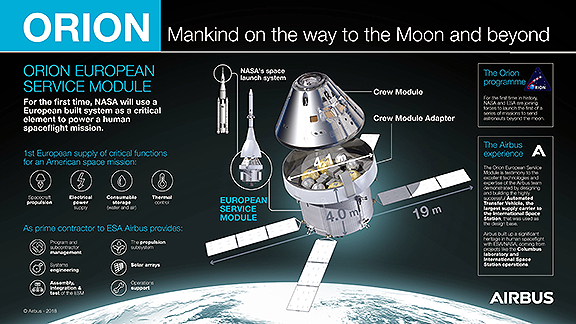 The design of the Orion spacecraft enables astronauts to be transported further into Space than ever before. The spacecraft will transport the four astronauts into Space, providing life support for the crew during the flight and enabling a safe return to Earth’s atmosphere, at extremely high re-entry speeds. NASA will use this mission beyond the Moon to develop the capabilities to send humans to Mars – heralding a new era of human spaceflight.

More than 20,000 parts and components are installed in the ESM, from electrical equipment to engines, solar panels, fuel tanks and life support materials, as well as several kilometres of cables and tubing. 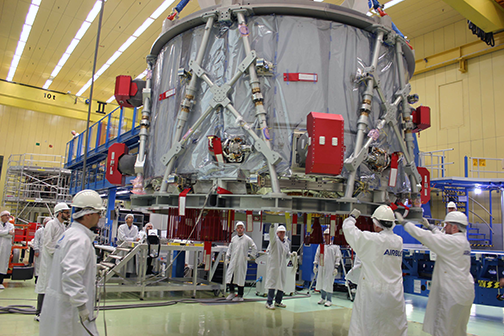 Photo is courtesy of Airbus.

The ESM is a cylinder that is around four metres in both height and diameter. Comparable to the European Automated Transfer Vehicle (ATV 2008 – 2015), also built by Airbus, it has a distinctive four-wing solar array (19 metres across when unfurled) that generates enough energy to power two households. The service module’s 8.6 tonnes of fuel can power one main engine and 32 smaller thrusters.

At launch, the ESM weighs a total of just over 13 tons. In addition to its function as the main propulsion system for the Orion spacecraft, the ESM will be responsible for orbital maneuvering and position control. It also provides the crew with the central elements of life support such as water and oxygen, and regulates thermal control while it is docked to the crew module. Furthermore, the unpressurized service module can be used to carry additional payload.

During the development and construction of the ESM, Airbus has drawn on its extensive experience as prime contractor for ESA’s ATV, which provided the crew on board the International Space Station with regular deliveries of test equipment, spare parts, food, air, water and fuel.

Oliver Juckenhöfel, Head of On-Orbit Services and Exploration at Airbus, said that the delivery of the first European Service Module for NASA’s Orion spacecraft is a hugely significant moment, and NASA’s ground-breaking deep-space mission is continuing to pick up speed. Very soon, the crew module and the service module will come together for the first time at Kennedy Space Center, and integration and testing can then begin. Working on the Orion project has cemented the company's relationships with our customers, ESA and NASA, and with the firm's industrial partner, Lockheed Martin Space. Airbus is committed to further reinforcing the trust that ESA and NASA have already placed in the company's know-how and expertise when it comes to the development and construction of the first ESM and work has already begun on the integration of the second service module in the company's clean rooms.