Prospects for the Small Satellite Market Report Debuts from Euroconsult

According to Euroconsult’s latest report, Prospects for the Small Satellite Market, a significant expansion is underway in the smallsat market, both in terms of demand and systems’ capabilities — about 7,000 smallsats are due to be launched over the next ten years, i.e,. a six-fold increase from the 1,200 units launched over the past decade. About 50 constellations, two of which are mega constellations, account for over 80% of the smallsat count.

Smallsats’ applications are multiple. In the past, “technology development” was the dominant application to test future technologies and payloads or for educational purposes. In future years, three applications will dominate the smallsat market:

• Broadband Communication is by far the largest application with close to 3,500 satellites expected from 2018 to 2027 (of
which 92 percent for two mega constellations);
• Earth Observation will almost triple, from 540 satellites in the past to 1,400 anticipated from 2018 to 2027. Three
constellations alone plan to launch more than 800 satellites during this period, of which two are cubesat-based;
• Information for data collection and narrowband communications for AIS, ADS-B, Internet of Things, and Machine to
Machine communication. It is a growing market with 850 satellites to be launched by 14 constellations that are currently
raising funds or launching demonstrators. 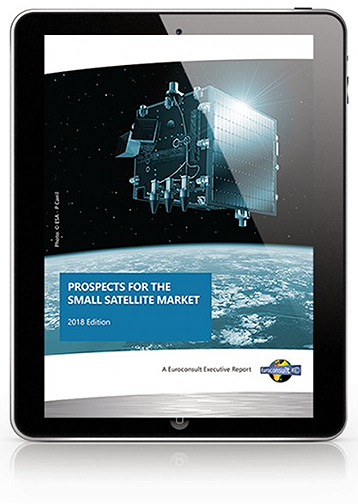 The 7,000 smallsats that are due to be launched over 2018-2027 are valued at $38 billion for satellite manufacturing and launch, almost quintupling decade-to-decade. The smaller growth in market value relative to that in smallsats count reflects the growing penetration of low-cost smallsats for 1) cubesats and nanosats below 50 kg of launch mass and 2) for large scale constellations with satellite unit cost of $1-$1.5 million. Cubesats alone represent a mere 4% of future total market value. A significant part of that market is already contracted or captive via domestic providers as vertical integration (i.e. in-house manufacturing and/or launch) is more common for smallsats than for larger satellites.

The launch services of smallsats are expected to generate $16 billion in the next ten years i.e. a strong growth over that of the past decade. Growth in launch revenues is stronger than that of satellite manufacturing with more diversity in launch services and various quality of services. Smallsat operators currently launch with medium to heavy launchers that are contracted directly or through launch brokers. Several dedicated smallsat launchers are in development, the most advanced being on the edge of performing maiden flights, in order to be more responsive to market needs (on time, on orbit) but at the expense of a premium in specific price (price per kg into orbit).

Maxime Puteaux, Senior Consultant at Euroconsult and editor of the report, said that by 2022, an average of 580 smallsats will be launched every year as a result of initial constellation deployment. This compares to an annual average of 190 satellites launched over the past five years. The average will then jump to 850 satellites per year on subsequent years up to 2027 because of the deployment of one mega constellation. Smallsat demand for constellations is cyclical as it is driven by deployment in batches whereas demand for single satellite missions is more stable. Performance improvements and continuous miniaturization reshape the smallsat market as customers have the choice between lighter satellites with the same capabilities or larger but more capable satellites. In the heaviest mass category, smallsats are now able to perform missions that were only achievable in the past by satellites heavier than 500 kg."

Download an extract of the report at this direct link...