A team from Mohammed Bin Rashid Space Center (MBRSC) has conducted the final technical tests on KhalifaSat, which arrived at Tanegashima Space Center in Japan.

KhalifaSat was prepared for mating with the launch vehicle (H-IIA Rocket) and has been successfully installed into it and is awaiting launch on October 29. The satellite is stored within a specially designed area called the Vehicle Assembly Building (VAB) until the launch date. KhalifaSat must be present in this area for five to 40 days before the launch date. 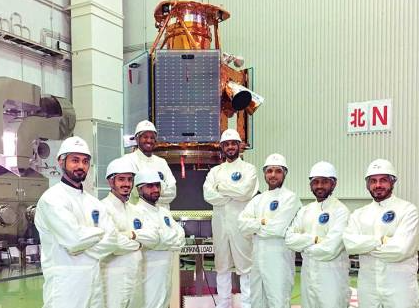 Technical tests were conducted on KhalifaSat to determine its safety on the H-IIA Rocket. These tests include a functional verification test to confirm that all the sub-systems are working well, battery safety testing and other related tests. Mitsubishi Heavy Industries provided the team with all the necessary facilities to carry out these tests.

Yousuf Hamad Al Shaibani, Director General of MBRSC, said, “Conducting the technical tests on KhalifaSat, the first satellite developed 100 percent in the UAE, is an important step in preparation for its launch from Tanegashima Space Center in Japan.”

He said the Center was selected as it is as the largest rocket launch complex in Japan and one of the rare sites in the world that allows satellite and other spacecrafts into orbit, due to its facilities which help to achieve a series of operations such as assembling spacecrafts, maintenance, final testing of satellites, installing spacecrafts, follow-up after installation, and tracking of spacecrafts after take-off.”

Al Shaibani stressed that MBRSC is committed to implementing the directives of the UAE’s wise leadership, achieving its objectives towards space exploration and investment, and increasing efforts to develop this sector by promoting innovation and enhancing the skills of Emirati youth. He added that these dedicated Emirati youth are the reason for the completion of KhalifaSat, which will launch soon to begin its five-year planned mission life to provide information aimed at improving the quality of life.

Engineer Amer Al Sayegh, KhalifaSat Project Manager at MBRSC, highlighted that “conducting the technical tests on KhalifaSat at Tanegashima Space Center on schedule reflects the success of MBRSC’s plan to launch it on October 29. It also shows the high level of professionalism of the 70 male and female Emirati engineers working on this huge project”.

MBRSC had previously announced that October 29, 2018 is the official date for the launch of KhalifaSat, into orbit aboard H-IIA rocket at the Tanegashima Space Center in Japan for a planned mission life of five years. For this, MBRSC is partnering with Mitsubishi Heavy Industries (MHI) and the Japan Aerospace Exploration Agency (JAXA).

Once deployed into a Low Earth Orbit (about 613km up), it will capture and deliver high-quality detailed images of Earth to the ground station at MBRSC, Dubai. This service will assist government organisations and private sector enterprises all over the world. KhalifaSat weighs in at just 330kg. It contains an advanced positioning system that allows a large number of 3D images to be captured at once, with excellent accuracyand speed. The images will be used to detect the effects of global warming, ensure responsible urban planning and management, and aid relief efforts for natural disasters. KhalifaSat has a planned mission life of five years.