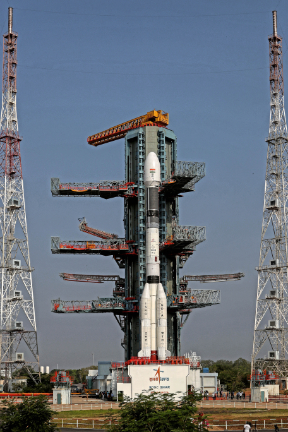 The GSLV-F10 launch vehicle with GISAT-1 aboard on the launch pad.

The Indian Space Research Organization (ISRO) has announced that the GISAT-1 satellite onboard the GSLV-F10 launch vehicle that was planned for a March 5, 2020, push to orbit has been postponed due to unstated technical reasons — a revised launch date will be revealed in due course.

Weighing about 2,268 kg, GISAT-1 is the first, state-of-the-art, agile, Earth Observation (EO) satellite and will, ultimately, be placed in a Geosynchronous Transfer Orbit by GSLV-F10. Subsequently, the satellite will reach the final geostationary orbit using its onboard propulsion system.

A 4 meter in diameter ogive-shaped payload fairing is being flown for the first time in this GSLV flight, which is also the 14th flight of the GSLV.

When on-orbit in its geostationary orbit, GISAT-1 will facilitate near, real time observation of the Indian sub continent, under cloud free condition, at frequent intervals.