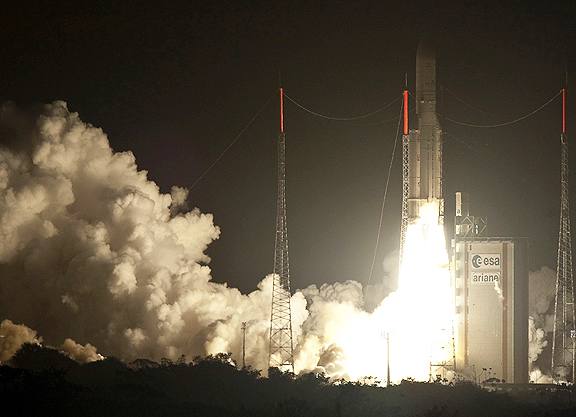 Ariane 5 makes an on-time liftoff from the ELA-3 launch zone with its dual payload of the W3B and BSAT-3b satellites. Photo is courtesy of Arianespace.

Lifting off on time at 6:51 p.m. from the Spaceport’s ELA-3 launch zone in French Guiana, the Ariane 5 deployed its W3B and BSAT-3b passengers during a flight lasting just under 38 minutes. The launcher’s payload lift performance was approximately 8,260 kg., which included a combined 7,460 kg. mass for the two satellites, along with Ariane 5’s SYLDA 5 multi-payload dispenser system and associated integration hardware. Ariane 5 delivered another highly accurate performance in tonight’s mission, with the following provisional orbital parameters at the injection of its cryogenic upper stage:
The 5,370-kg. W3B satellite for Eutelsat was deployed on tonight’s Ariane 5 flight at 28 minutes into the mission, marking a new step in Arianespace’s uninterrupted relationship with Europe’s leading satellite operator, which has spanned more than 25 years. W3B is the 25th Eutelsat satellite orbited by Arianespace, and it will offer significant flexibility for a wide range of services from TV broadcasting to professional data networks and broadband access. Based on Thales Alenia Space’s 4000 spacecraft platform, W3B will have a coverage area over Europe, the Middle East, Central Asia, Africa and the Indian Ocean Islands, with an operational design lifetime of 15 years. It initially will be located at 16 degrees East, followed by a move to an orbital slot of 7 degrees East for collocation with Eutelsat’s W3A satellite.

The BSAT-3b satellite launched by Arianespace today was lofted for Lockheed Martin Commercial Space Systems on behalf of Japan’s B-SAT Corporation. This was the seventh B-SAT spacecraft orbited by Arianespace. Manufactured using Lockheed Martin’s A2100 A platform, the 2,060-kg. relay satellite is fitted with 12 130-watt Ku-band channels — with eight operating at a time. B-SAT will deliver direct-to-home television programming to Japan during its planned 15-year-plus lifetime.

The next Ariane 5 mission is set for November 25 with another heavy-lift launch, carrying the Intelsat 17 and HYLAS 1 satellites. It will be followed by one additional mission of this workhorse vehicle before the end of 2010.