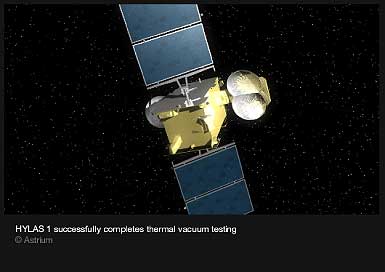 [SatNews] Ahead of schedule the Highly Adaptable Satellite (HYLAS 1), which was designed and built by Astrium for the satellite broadband operator Avanti Communications, has now arrived at the Guiana Space Centre in French Guiana. HYLAS 1's planned launch aboard an Ariane 5 in late November.

HYLAS 1 will bring high-speed broadband services to remote rural areas across Europe, using its ‘highly adaptable’ payload, developed by Astrium, primarily at its UK sites in Portsmouth and Stevenage. The payload operating in Ku- and Ka-bands is designed to allocate varying amounts of power and bandwidth to the different regions within its footprint, reacting to the highs and lows of traffic demand.

The satellite was flown to French Guiana aboard an Antonov An-124 cargo plane from Bangalore, India, where HYLAS 1’s satellite platform and integration was undertaken by the Indian Space Research Organisation. Over the coming weeks the satellite will be readied for launch and mated with the Ariane 5 launch vehicle.

The UK Space Agency and Technology Strategy Board have provided support for the development of HYLAS 1 through the UK subscription to the European Space Agency ARTES program.