According to AFP, Russia's Roscosmos space agency said in a statement that "it expects official explanations of NASA's position" and stressed that Dmitry Rogozin's visit was planned "in accordance with an invitation received earlier."

Rogozin, a nationalist politician who was sanctioned in 2014 by the EU, Canada and former U.S. President Barack Obama for his role in promoting the destabilization in Crimea when he was deputy prime minister, had been slated to visit America but NASA said Friday it was rescinding his invitation after complaints from U.S. lawmakers.

“We had heard from numerous senators suggesting that this was not a good idea,” NASA Administrator Jim Bridenstine told The Washington Post. “And I wanted to be accommodating to the interests of the senators, and so I have rescinded the invitation.”

When the sanctions were issued in response to Russia's invasion of Crimea, Rogozin reportedly said Russia should stop flying NASA's astronauts to the International Space Station. "After analyzing the sanctions against our space industry, I suggest the U.S. delivers its astronauts to the ISS [International Space Station] with a trampoline,” he wrote on Twitter at the time, according to the Post. 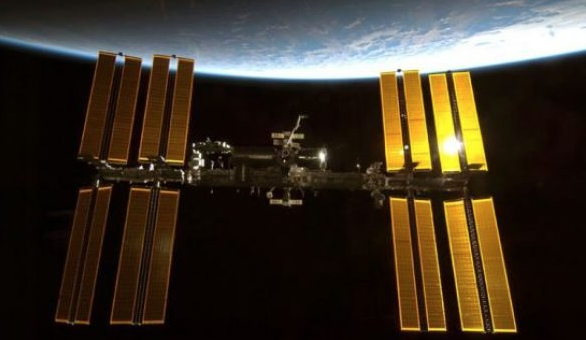 The International Space Station, photographed by an astronaut aboard the space shuttle Endeavour in 2010. (NASA)

Some U.S. senators said NASA should never have invited the controversial Russian official.

“America’s message to the Kremlin should be unequivocal: actions have consequences,” Sen. Jeanne Shaheen, D-N.H., said in a statement. “Administrator Bridenstine’s invitation to Dmitry Rogozin, one of the leading architects of the Kremlin’s campaign of aggression toward its neighbors, undercuts our message and undermines the United States’ core national security objectives."

Shaheen continued: "Rogozin has a proven record of choosing conflict over cooperation, and this invitation weakens the U.S.’ global standing by demonstrating the ease by which Russian officials can get around transatlantic sanctions."

“To welcome Mr. Rogozin to the United States and provide him a platform to speak is an affront to our sanctions regime and will further undermine the Trump administration’s limited credibility on Russia policy,” Menendez wrote in a letter to the NASA administrator.

"I am a supporter of NASA and understand the importance of maintaining a dialogue with the Russian Federation on issues related to space," Menendez added. "But that dialogue should not take place with a specially designated national on U.S. soil as it totally undermines our sanctions regime."

In his interview with the Post, Bridenstine said he thought it was "good for the world to see that countries that disagree on a host of other things can collaborate on space activities."

He also said he did not consult the White House on inviting Rogozin or rescinding the invitation.