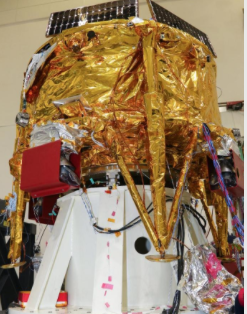 A time capsule on the Moon that will remain forever has been presented by the Israeli nonprofit SpaceIL and Israel Aerospace Industries (IAI) at IAI’s Space Division. This time capsule will travel to the Moon with the first Israeli spacecraft, which will launch from Cape Canaveral, Florida, in February, 2019.

The time capsule will include Israeli national, cultural and traditional symbols, such as Israel’s Declaration of Independence, Hebrew songs, the Wayfarer’s Prayer, and paintings by Israeli children.

The time capsule consists of three discs, each containing hundreds of digital files.

Included among the files, which will travel to the Moon inside SpaceIL’s lunar spacecraft, are:

The time capsule, along with the spacecraft, will remain on the Moon indefinitely, even after completing Israel’s first lunar mission. With no plans to return to Earth, the spacecraft and information within the time capsule’s disks could be found by future generations.

In early 2019, the spacecraft, recently named Beresheet (the Hebrew word for Genesis), will launch alongside other satellites as a secondary payload on a SpaceX Falcon 9 rocket. The precise launch date remains undetermined, as SpaceIL awaits final confirmation from the launch company.

Ido Anteby, CEO of SpaceIL said that this is another step on their way to the Moon. Inserting the disks into the spacecraft, which is a real "time capsule," indicates the spacecraft's readiness to blast off from the launch site in a few weeks. SpaceIL's crews and IAI have completed testing of the spacecraft and its systems, and are preparing for the beginning of the amazing and complex journey that exemplifies innovation, creativity and courage. The spacecraft's historic journey, which also includes a scientific mission, makes a significant contribution to advancing the space industry and the subject of space in Israel. 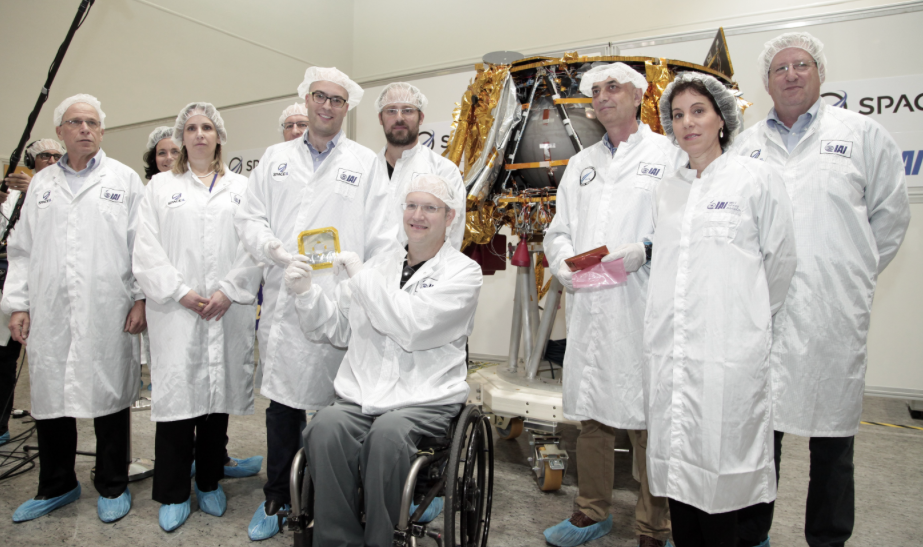 Yonatan Winetraub, one of three SpaceIL founders, said, as he inserted the time capsule into a spacecraft that this is a very emotional moment. They do not know how long the spacecraft and the time capsule will remain on the Moon. It is very possible that future generations will find this information and want to learn more about this historic moment.

Opher Doron, IAI’s Space Division General Manager added that they are proud to be the first non-governmental entity in the world to go to the Moon. Landing on the Moon was for many years a little-discussed topic among the public, but recently they saw growing interest as world superpowers seek to return to the Moon in a variety of commercial missions. There is no doubt that the technological knowledge acquired by IAI during the development and construction of Beresheet, together with Space IL and combined with the space capabilities developed over more than 30 years at IAI, puts them at the global forefront in the ability to complete lunar missions.

The spacecraft, whose construction was carried out at IAI’s Space Division, successfully completed a series of recent tests to examine the integration of systems, and a series of complex experiments aimed at testing its durability. Concurrently, validation and verification tests checked the function of the spacecraft in scenarios it could experience during the mission. Since actual space conditions cannot be replicated, tests are carried out in part by a SpaceIL simulator that mimics space conditions and part on the spacecraft itself. Next, SpaceIL will soon ship the spacecraft to the launch site in Cape Canaveral, Florida.

In October, SpaceIL and the Israeli Space Agency announced a collaboration with NASA that will enable SpaceIL to improve its ability to track and communicate with the spacecraft before, during, and after landing on the Moon. Two weeks ago a retro-reflector from NASA was installed on the spacecraft, an instrument that reflects laser beams and will enable NASA to precisely locate the spacecraft on the lunar surface after the landing.

SpaceIL, the Israel Space Agency and NASA also agreed that NASA will have access to data gathered by the magnetometer installed aboard the Israeli spacecraft. The instrument, which was developed in collaboration with Israel’s Weizmann Institute of Science, will measure the magnetic field on and above the landing site.