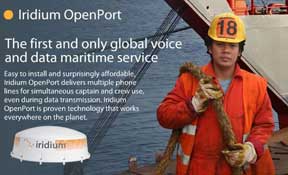 [SatNews] Wherever you go you are always connected, just as the sailboat Ocean Watch heads into the homestretch of the Around the Americas expedition, the captain reports that the vessel’s Iridium OpenPort® satellite terminal has provided reliable, high-quality voice and data links throughout the voyage.

Iridium Communications Inc. (Nasdaq: IRDM), and its service partner Stratos, provided the Iridium OpenPort system for the 64-foot steel-hull vessel’s 13-month circumnavigation of the North and South American continents, which departed from Seattle, Washington on May 31, 2009. The mission of the expedition is to call attention to the health of the world’s oceans and the impact of global climate change on local environments and ecosystems.

“So far, we have covered more than 25,000 nautical miles, including a west-east transit of the Northwest Passage and an east-west rounding of Cape Horn,” said expedition leader, Mark Schrader, in an e-mail posted from the Iridium OpenPort terminal at sea. “We have enjoyed regular daily Iridium communication via phone and e-mail. The connections were clear and strong at both ends of the Earth – coverage that you cannot find through any other maritime communications system.” 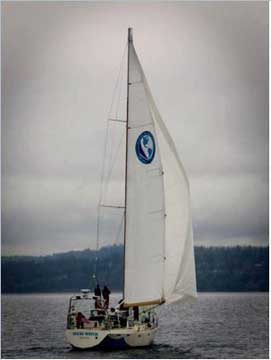 Day of departure: 2009; The 64-foot cutter Ocean Watch embarked on its 13-month voyage to circumnavigate the Americas last Sunday from Seattle and will hit a total of four ports in Alaska: Juneau, Dutch Harbor, Nome and Barrow. The ship departs Juneau on Sunday.
“Along with our daily communications to friends, families, schools and research institutions, we regularly receive large data files, PDFs of magazine articles and layouts for articles we’ve written for many different magazines,” Schrader said. “The Iridium/Stratos package has been the best and most reliable method for keeping in touch, and has made it possible for us to promote – in real time – the educational and scientific mission of the Around the Americas voyage.”

“Since we are filing a daily story along with images for uploads to our Website, we now have sent more than 1,500 images, with some photo packages approaching the 4 MB size, via Iridium with no significant problems,” said Schrader.

“I doubt anyone attempting a transit of the Northwest Passage in a sailboat has written a book about it at the same time,” Schrader continued. “Thanks to Iridium, we did just that. We transmitted a 60-page book, including text and images – many of them very large files – to our designer/publisher through Iridium from the very remote village of Pond Inlet in the Canadian Arctic.”

Self published, designed by Tom Wallace and printed by IGI Publishing, the book was completed in time for the vessel’s first East Coast U.S. port of call in Boston, Massachusetts.

“The Around the Americas expedition has been an ideal platform to showcase the strength of the Iridium OpenPort equipment as well as the high-quality voice and data connections through the Iridium satellite network,” said Greg Ewert, executive vice president, global distribution channels, Iridium. “We have delivered and activated more than 1,500 Iridium OpenPort terminals on a wide variety of vessel types, ranging from sailboats to large commercial ships.”

“Iridium’s satellite network provided excellent coverage over the entire route for the Around the Americas voyage, including the extreme northern and southern latitudes,” said Ronald Spithout, senior vice president, sales and marketing, Stratos. “Iridium, with its low-earth orbit constellation of cross-linked satellites, is the only maritime satellite service capable of reaching these Polar Regions, which is critical for organizations such as the Around the Americas team that need a reliable, critical communications lifeline.”

The vessel is currently sailing northward up the U.S. West Coast, with a planned return to its original homeport in Seattle, Washington on June 17.