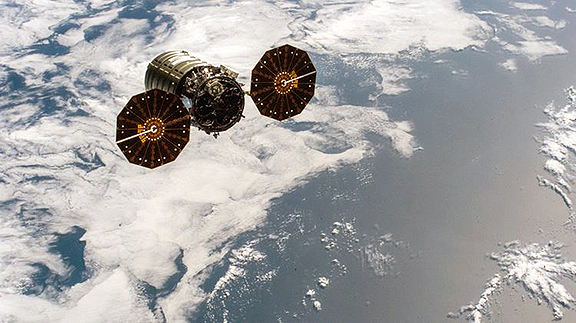 During the mission, the “S.S. John Young” Cygnus met the needs of multiple customers throughout this flight to the International Space Station. The spacecraft removed more than 5,500 pounds (2,500 kilograms) of disposal cargo from the space station.

After departure, the extended mission included the deployment of three CubeSats via the NanoRacks External Cygnus Deployer at two different altitudes and two CubeSats from the Slingshot CubeSat Deployer System. Slingshot, a new commercial customer for Cygnus, is a flexible platform that can fly hosted payloads and CubeSats. The spacecraft also operated a commercial powered payload for another new customer, UbiquitiLink, Inc. These innovative uses of Cygnus beyond the primary mission demonstrate expanded commercial opportunities enabled by partnerships built through the space station.

The mission officially concluded on February 25 at 4:05 a.m. EST when Cygnus performed a safe, destructive re-entry into the Earth’s atmosphere over the Pacific Ocean east of New Zealand. The mission began November 17, 2018, when Cygnus launched aboard a Northrop Grumman Antares™ rocket from NASA Wallops Flight Facility in Virginia. Upon arrival at the orbiting laboratory, Cygnus delivered approximately 7,400 pounds (3,350 kilograms) of cargo, supplies and scientific experiments to the astronauts. It remained docked for 81 days at the orbiting laboratory before departing the space station on February 8. 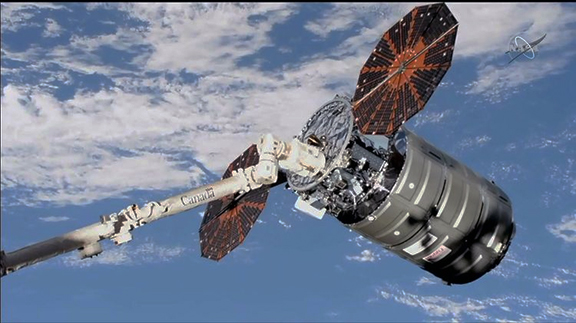 The next Cygnus launch, known as the NG-11 mission, is currently scheduled in mid-April. This will be the final mission under Northrop Grumman’s CRS-1 contract with NASA before starting the CRS-2 contract missions in the fall of 2019.

Frank DeMauro, VP and GM, Space Systems, Northrop Grumman, reported that this was a flawless mission for Cygnus that further demonstrated its ability to operate as an on-orbit science platform and launch pad for deployment of commercial CubeSats on extended missions. Now, the company turns attention to the next launch this spring where Cygnus will fly on an extended duration mission to further demonstrate its abilities as an on-orbit test platform. These capabilities will showcase Cygnus as an evolving space vehicle that can build on the positive impact of the space station to grow new commercial partnerships.