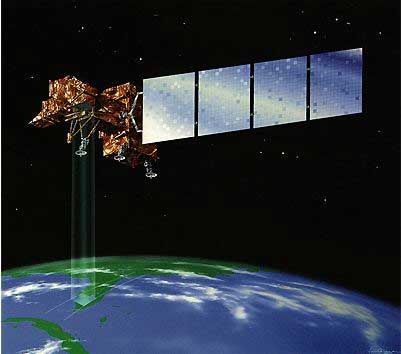 Landsat 7
NASA satellites were interfered with four separate times in 2007 and 2008, possibly by the Chinese military, according to a draft of an upcoming report for the US Congress.

The latest draft of the report by the US-China Economic and Security Review Commission said the computer hackers behind the interference gained the ability to issue commands to one of the satellites on two occasions.

The targeted satellites are used for observation of the earth's climate and terrain, according to the report to be submitted to Congress on November 16. A copy of the latest draft of the report was obtained by AFP on Thursday.

It said the account of the interference with the satellites came from a May 2011 briefing for the Commission by the US Air Force.

The hackers appear to have exploited the information systems of the Svalbard Satellite Station (SvalSat), a commercially operated satellite ground station in Spitsbergen, Norway, to gain access to the satellites, the report said.

SvalSat relies on the Internet for data access and file transfers, it said, citing a recent National Aeronautics and Space Administration report.

On October 20, 2007, Landsat-7, a US earth observation satellite jointly managed by NASA and the US Geological Survey, experienced 12 or more minutes of interference, the report said.

It said the hackers behind the interference with Terra EOS AM-1 "achieved all steps required to command the satellite but did not issue commands."

On October 22, 2008, Terra EOS AM-1 experienced nine or more minutes of interference, the report said, and "the responsible party" again "achieved all steps required to command the satellite but did not issue commands."

"For example, access to a satellite's controls could allow an attacker to damage or destroy the satellite," the commission said.

"The attacker could also deny or degrade as well as forge or otherwise manipulate the satellite's transmission," it said. "A high level of access could reveal the satellite's capabilities or information, such as imagery, gained through its sensors."

The report stressed that it was not recounting the incidents "on the basis of specific attribution information" but rather "because the techniques appear consistent with authoritative Chinese military writings."

"Authoritative Chinese military writings advocate for such activities, particularly as they relate to ground-based space infrastructure, such as satellite control facilities," the report said.

The draft report also accused China of being behind a "range of malicious cyber activities" including state-level involvement in cyberattacks, industrial espionage and the compromise of US and foreign government computer systems.

"In 2011, US and foreign government organizations, defense contractors, commercial entities, and various nongovernmental organizations experienced a substantial volume of network intrusions and attempts with various ties to China," the report said.

China has repeatedly denied any state involvement in cyberattacks against government agencies and firms, including well-publicized attacks on Internet giant Google that sparked a row between Washington and Beijing.