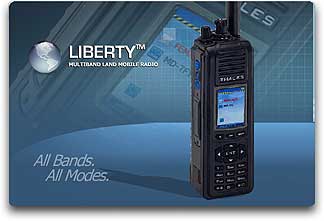 The Liberty radio, introduced in early 2008, is made in the U.S. and is the first multiband, software-defined LMR designed specifically for government agencies and first responders. The Liberty LMR operates in all modes, with full encryption, and enables multi-agency communications in all the public safety frequency bands (136-174 MHz, 380-520 MHz, 700 MHz, and 800 MHz). The Liberty radio works on current analog systems as well as Project 25 (P25) trunking systems, regardless of frequency range. The radio’s trunking capabilities were demonstrated at the International Wireless Communications Expo (IWCE) held earlier this year, operating seamlessly on multiple vendors’ P25 trunking systems and in multiple bands. Whereas other products need a link to achieve basic system interoperability, the Liberty radio achieves this higher, user level of interoperability by simply changing channels.

The Liberty radio was the first multiband LMR to be put in the hands of users. It is currently undergoing field testing in collaboration with the U.S. Department of Homeland Security (DHS), Science and Technology Directorate, under a DHS grant awarded last year. In parallel, operational evaluation by multiple public service agencies in large major metropolitan areas, by statewide public service agencies, and at federal laboratories is ongoing. The Liberty radio was in service at the Presidential Inauguration and the Academy Awards and is receiving continued evaluation as part of a series of live burns.

“This approval from the FCC further validates the capabilities, performance, and maturity of the Liberty multiband radio,” said Steve Nichols, Director of Homeland Security and Public Safety for Thales Communications. “This is an important advancement for the public safety industry.”