Blue Origin's Successful Separation Test ... "We Can't Wait to Take You Guys to Space One Day" 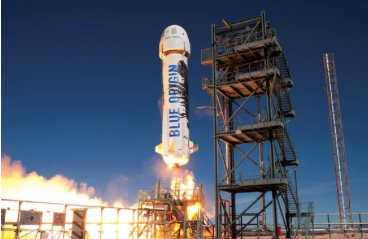 A critical test was conducted and succeeded on several levels for Blue Origin at their Texas facility. What was the test? A live separation test of the crew capsule from the rocket booster took place, and everything preformed as expected. The crew capsule fired its escape motor at the correct time, sending the capsule higher than it ever has gone before.

This successful test that lasted for two-and-a-half minutes, was the ninth launch for Blue Origin and the third for the New Shepard rocket and is described as a huge milestone for Jeff Bezos’ rocket company. During the test the engine is cut off, and the capsule coasts into space, while the booster drops and returns back down, with the landing gear kicking in and rocket-powered breaking system lands on the ground.

The entire mission took approximately 11 minutes to unfold, while over 20,000 people tuned into Blue Origin’s YouTube live stream to watch the test, with the capsule hitting a maximum speed of 2,236 miles per hour and height of 389,846 feet. The spacecraft had a passenger aboard as well, albeit a non-living one: “Mannequin Skywalker” is a test dummy outfitted with sensors to relay information back to the Blue Origin science team.

“[The mannequin] probably peaked at 10 Gs,” said Blue Origin’s Ariane Cornell, during the webcast. “But you know what? That is well within what humans can take, especially within such a short spurt of time and in those reclined seats. It’s just important that we bring the astronauts home safely.”

The company expects tests with a human crew could commence as early as the end of this year. No timeline has been set for commercial flights, however. “We can’t wait to take you guys to space one day,” Cornell added.