Arianespace Launches Sentinel-1B... On Its Way To Meet Its Twin ...Copernicus Now Compete 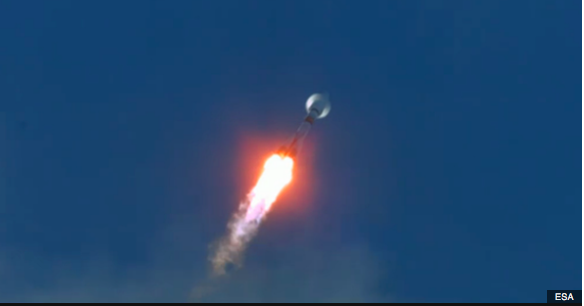 A few delays are now news of the past as Sentinel-1B is on its way to complete Europe´s “Radar Vision” and the Copernicus radar constellationâ€‹.

Europe's Earth Observation satellite Sentinel-1B, built by Thales Alenia Space as prime contractor and carrying an Airbus Defence and Space built radar instrument, is on its way to complete the Copernicus radar constellation. The 2.3 tonne satellite lifted off on a Soyuz rocket from Europe’s Spaceport in Kourou, French Guiana at 21:02 GMT (23:02 CEST). The satellite separated from the upper stage about 24 minutes after liftoff.

Once activated, it will operate jointly with its twin, Sentinel-1A (launched in April 2014) and form the Sentinel-1 polar orbiting constellation, which will significantly improve the revisit and response times to provide continuous all-weather round-the-clock imagery for marine, land monitoring and emergency services. Working together, the Sentinel-1 satellites will image the entire planet every six days.

As its twin already does, the Sentinel-1B satellite will now be able to communicate with Earth through a ground segment designed and built by Airbus Defence and Space. Via a network of receiving stations across Europe, the ground segment enables Sentinel satellites programming and data reception, as well as image processing, archiving and calibration as well as delivery of images to end-users. Airbus Defence and Space is additionally hosting a support center at its Toulouse site (France).

As an advanced radar mission, Sentinel-1 can image the Earth’s surface through cloud and rain and regardless of whether it is day or night. This makes it an ideal mission, for example, for monitoring the polar regions, which are in darkness during the winter months and tropical forests, which are typically shrouded by cloud.

Over oceans and seas, the mission provides imagery to generate timely maps of sea-ice conditions for safe passage, to detect and track oil spills and to provide information on wind, waves and currents. Over land, Sentinel-1’s systematic observations are used to track changes in the way the land is used and to monitor ground movement with exceptional accuracy. Moreover, this mission is designed specifically to aid fast response during emergencies and disasters such as flooding and earthquakes.