A close call is probably an apt description describing everyday happenings. What about a $671 million spacecraft that is about to cross paths with Mars' moon by just seven seconds?

On March 6, NASA’s MAVEN Mars orbiter is expected to cross paths with the Red Planet’s moon Phobos. At first, computer models showed the two satellites missing each other by just seven seconds.

Mission controllers decided that was too great a risk for the $671 million spacecraft, whose name stands for Mars Atmosphere and Volatile EvolutioN. So, on Tuesday, they fired its rocket engine enough to increase its velocity by 0.4 meters per second. Controllers say that small correction will yield a safe 2.5 minutes between MAVEN and Phobos on the 6th.

Maneuvers like this will likely become more common as traffic to the Red Planet increases. They’re already commonplace in Earth orbit, says space policy expert Brian Weeden. “Most objects on a collision course in space move too fast for the human eye to see and .... the collision will happen much faster than any human could possibly react to,” he told Congress in 2014. 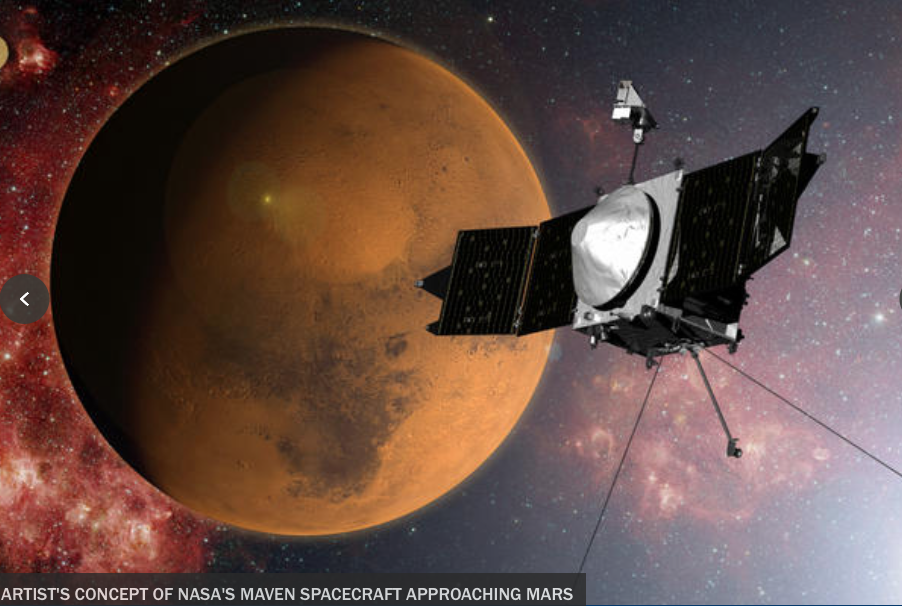 Instead, when orbital models predict a close pass, “a warning is provided to the satellite operator or operators involved along with the probability of collision,” he explained. “It is currently up to each operator to determine their own tolerance for risk and use that as a basis for determining whether or not to maneuver the satellite to change its trajectory and avoid the close approach.”

Satellite operators can direct spacecraft in Earth orbit to carry out these maneuvers in seconds, compared with 13 minutes for Mars. But the sheer number of satellites now orbiting Earth may make preventing collisions over our own heads more difficult – and more important.

There are currently six spacecraft orbiting Mars, SpaceFlight Insider reports. They’ve already proven themselves adept at evasive maneuvers like MAVEN’s on Tuesday, or a “duck and cover” one performed during a 2014 comet flyby. By contrast, Earth can currently claim more than 1,400 operational man-made satellites, according to the Union of Concerned Scientists.

That number’s growing fast, thanks to the development of “CubeSats” that can measure as small as 10x10x10 cm, at prices that universities and startup firms can afford. India sent 103 CubeSats – plus a larger conventional satellite –  into orbit last month on a single rocket.

Dr. Weeden, who serves as the director of Program Planning at the Secure World Foundation, which works to promote sustainaibility in space, sees trouble in this trend. Many of these new satellites, he told Congress, have no propulsion system, are difficult to track because of their size, and are “developed and operated by new space actors who may not have the experience to do so safely or responsibly.”

“This means that ... when involved in a close approach with another space object they are for all intents and purposes just another piece of space debris,” he said.

Other space experts agree. Hugh Lewis, a space debris expert from the University of Southampton, has counted more than 360,000 close encounters involving the satellites since 2005. G. Madhavan Nair, former chairman of the Indian Space Research Organization, has even raised doubts about whether his country should continue to launch CubeSats, warning that India could be liable for damages from a future collision with a foreign satellite.

To reduce the likelihood of these collisions, the Secure World Foundation and other “space sustainability” advocates want to strengthen spacecraft regulations, expand monitoring of Earth’s orbital neighborhood, and increase coordination among spacefaring nations. More ambitious schemes – like deploying a “space whip” to capture debris – haven’t yet borne fruit.

Some scientists worry that, if left unchecked, increased “space junk” could lead to the Kessler Syndrome, in which a chain reaction of collisions leaves Earth surrounded with a belt of debris. Already, satellite collisions have unleashed swarms of debris around Earth – and sent a fictional astronaut played by George Clooney to an untimely death in the 2013 movie Gravity.

Dr. Weeder doesn’t see “an infinite growth in the debris population” coming to pass. But a future with more collisions and “space junk,” he told Congress, could easily result in “increased operating costs to try to detect and avoid potential collisions.”

“These rising costs will likely hinder commercial development of space and will place additional pressure on government budgets, potentially resulting in the loss of some of the benefits we currently derive from space.”