The spacecraft will study how magnetic fields around Earth connect and disconnect, explosively releasing energy via a process known as magnetic reconnection. Findings will enable new understanding of a universal process that is a major driver of space weather events that can affect modern technological systems such as communication networks, GPS navigation, and electrical power grids. All four satellites were carried into space on a United Launch Alliance Atlas V rocket.

Moog delivered 17 monopropellant MONARC-5 thrusters to NASA Goddard Space Flight Center for the satellites. Following DSCOVR and SMAP, the MMS mission marks the third in 2015 using MONARC-5 thrusters to provide attitude control. In addition, MMS will add to the long heritage and great success of the MONARC-5 engine since its inception over 30 years ago. Moog also delivered 38 fill and drain valves, which aid in ensuring high reliability of the propulsion system, crucial to accurate positioning of the spacecraft. 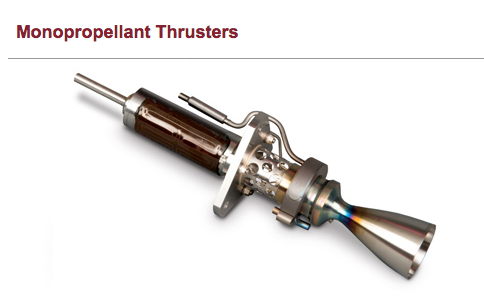 The identically instrumented MMS spacecraft will fly in an adjustable pyramid-like formation enabling them to observe the three-dimensional structure of magnetic reconnection for the first time. Control of this precision formation flying requires ultra-sensitive accelerometers. Moog provides shock isolation systems to protect these accelerometers from various high energy release events during the pre-science flight phase.

The ULA Atlas V 421 rocket that carried the MMS spacecraft includes a Moog Electromechanical (EM) Thrust Vector Control (TVC) Actuation System and rad-hard digital controller on the Centaur upper stage. The EM TVC System guides the upper stage of the rocket into position to inject the satellite into orbit.

In addition, Moog provided the Inlet Valves and Propellant Utilization (PU) Motor for the main Oxidizer Control Valve on the RL10 upper stage engine and the Control Valves for the Roll Control Module (RCM) Thrusters.

MMS sensors will measure charged particle velocities, as well as electric and magnetic fields, with the rapid time resolution and accuracy needed to capture the elusively thin and fast-moving electron diffusion region. MMS probes reconnection of solar and terrestrial magnetic fields in the day-side and night-side of Earth’s magnetosphere, the only natural laboratory where it can be directly observed by spacecraft. Studying this nearby with MMS will help explain reconnection elsewhere as well, including the atmosphere of the sun and other stars, in the vicinity of black holes and neutron stars, and at the boundary between our solar system’s heliosphere and interstellar space.