NASA's New Horizon...Screams Across The Sky At One Million Miles Per Day... Destination Pluto


[SatNews] While there have been debates whether Pluto qualifies as a planet or not, apparently it's important enough for a spacecraft to tear through the atmosphere clocking a million miles a day to arrive at this destination. 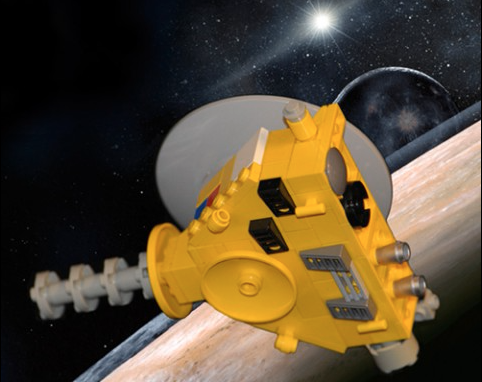 An artist’s concept of the New Horizons spacecraft at Pluto.

Washington, D.C. – One of the fastest spacecraft ever built — NASA’s New Horizons — is hurtling through the void at nearly one million miles per day. Launched in 2006, it has been in flight longer than some missions last, and it is nearing its destination: Pluto.

“The encounter begins next January,” says Alan Stern, of the Southwest Research Institute and the mission’s principal investigator. “We’re less than a year away.”

Closest approach is scheduled for July 2015 when New Horizons flies only 10,000 km from Pluto, but the spacecraft will be busy long before that date.

The first step, in January 2015, is an intensive campaign of photography by the Long Range Reconnaissance Imager or “LORRI.” This will help mission controllers pinpoint Pluto’s location, which is uncertain by a few thousand kilometers.

“LORRI will photograph the planet against known background star fields,” explains Stern. “We’ll use the images to refine Pluto’s distance from the spacecraft, and then fire the engines to make any necessary corrections.”

At first, Pluto and its large moon Charon will be little more than distant pinpricks—“a couple of fat pixels,” says Stern–but soon they will swell into full-fledged worlds.

By late April 2015, the approaching spacecraft will be taking pictures of Pluto that surpass the best images from Hubble. By closest approach in July 2015, a whole new world will open up to the spacecraft’s cameras. If New Horizons flew over Earth at the same altitude, it could see individual buildings and their shapes.

Stern is looking forward to one of the most exciting moments of the Space Age. “Humankind hasn’t had an experience like this–an encounter with a new planet–in a long time,” he says. “Everything we see on Pluto will be a revelation.”

He likens New Horizons to Mariner 4, which flew past Mars in July 1965. At the time, many people on Earth, even some scientists, thought the Red Planet was a relatively gentle world, with water and vegetation friendly to life.

Instead, Mariner 4 revealed a desiccated wasteland of haunting beauty. New Horizons’ flyby of Pluto will occur almost exactly 50 years after Mariner 4’s flyby of Mars—and it could shock observers just as much.

Other than a few indistinct markings seen from afar by Hubble, Pluto’s landscape is totally unexplored. Although some astronomers call Pluto a “dwarf” planet, Stern says there’s nothing small about it. “If you drove a car around the equator of Pluto, the odometer would rack up almost 5,000 miles—as far as from Manhattan to Moscow.” Such a traveler might encounter icy geysers, craters, clouds, mountain ranges, rilles and valleys, alongside alien landforms no one has ever imagined.

“There is a real possibility that New Horizons will discover new moons and rings as well,” says Stern.

Yes, Pluto could have rings. Already, Pluto has five known moons: Charon, Styx, Nix, Kerberos, and Hydra. Numerical simulations show that meteoroids striking those satellites could send debris into orbit, forming a ring system that waxes and wanes over time in response to changes in bombardment.

“We’re flying into the unknown,” says Stern, “and there is no telling what we might find.”