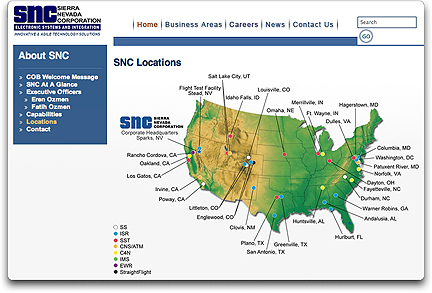 Debuting today at the National Space Symposium in Colorado Springs is the newly formed Space Systems business area of Sierra Nevada Corporation (SNC). The Space Systems' business area was established in 2009 through the merger of SNC subsidiary, MicroSat Systems, and SpaceDev, which was acquired by SNC in late 2008.  MicroSat Systems and SpaceDev have a combined 20-year history in space, providing hardware for over 300 Earth orbiting and interplanetary missions.

The new organization has a workforce of over 250 employees in its four locations:

SNC will exhibit at the National Space Symposium to show the combined capabilities of the new space business area and plans to host numerous customer meetings and press events. Sierra Nevada Corporation's headquarters is in Sparks, Nevada.