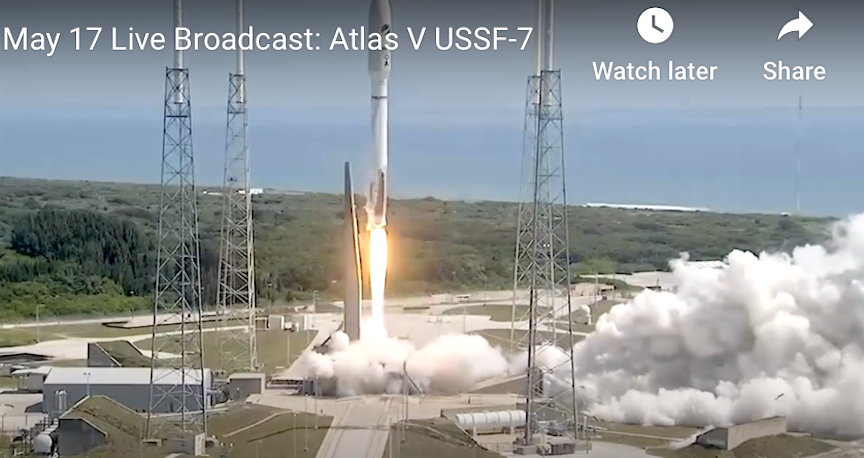 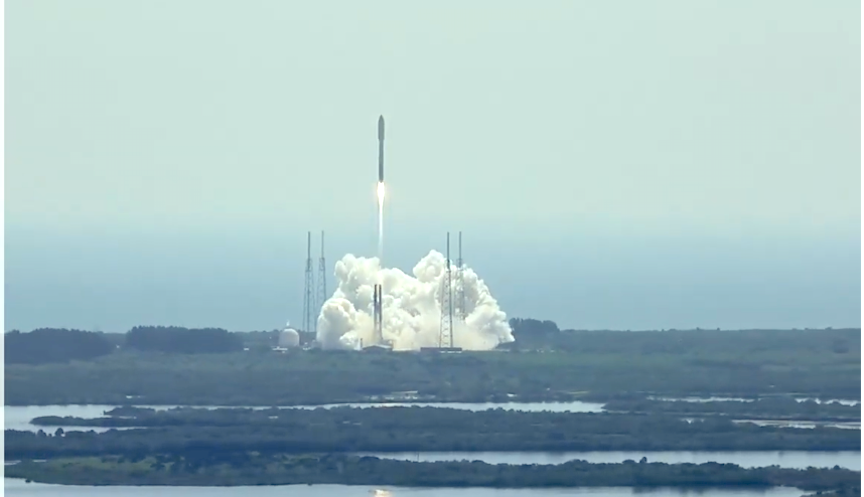 Today's seven-hour countdown started at 1:54 a.m. EDT under the guidance of ULA Launch Conductor Dillon Rice. The rocket was powered up and underwent standard day-of-launch testing while crews finished configuring the launch pad. The "go" for fueling was given by ULA Launch Director Paul Aragon at 6:42 a.m. Tanking operations were successfully performed as 66,000 gallons of liquid oxygen and liquid hydrogen were placed into the rocket's tanks. The clear to launch was given at 9:08 a.m. EDT by Space Force Mission Director Col. Shane Clark.

However, yesterday, the weather frustrated many, not the least of them being ...

Tory Bruno, ULA's President and CEO says it all in his Tweet,

Darn weather. See you tomorrow. Going to need everyone to focus on those calm, clear thoughts even harder ...

United Launch Alliance's (ULA) Atlas V 501 rocket was scheduled to launch the USSF-7 mission for the U.S. Space Force from Space Launch Complex-41 on May 16, 8:24 a.m. EDT, however due to poor weather conditions the mission was scrubbed today and tentatively rescheduled for tomorrow. This mission is a collaborative salute to honor front-line responders and those affected by COVID-19. This launch will mark the sixth flight of the X-37B Orbital Test Vehicle (OTV-6) and the second mission for the U.S. Space Force. 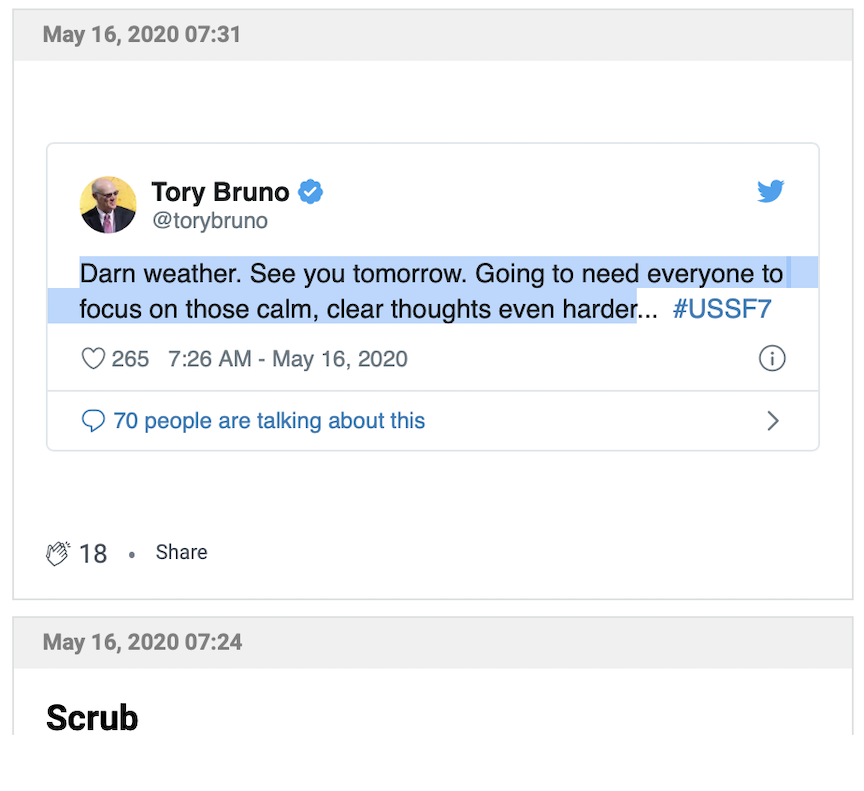 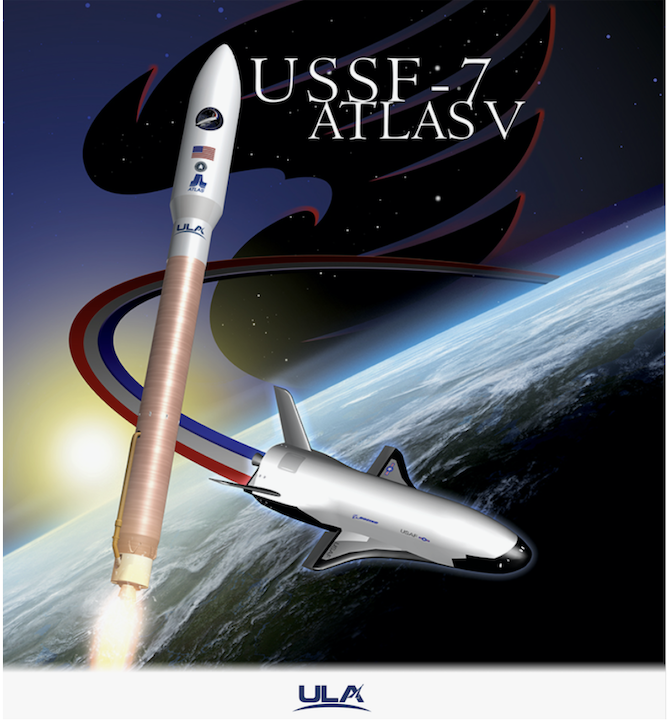 This will be the 139th mission for United Launch Alliance. It is the 84th for an Atlas V rocket and the 7th in the 501 configuration.

ULA's Sixth Orbital Test Vehicle for the U.S. Space Force Mission Dedicated to Front-Line Responders and Those Affected by COVID-19 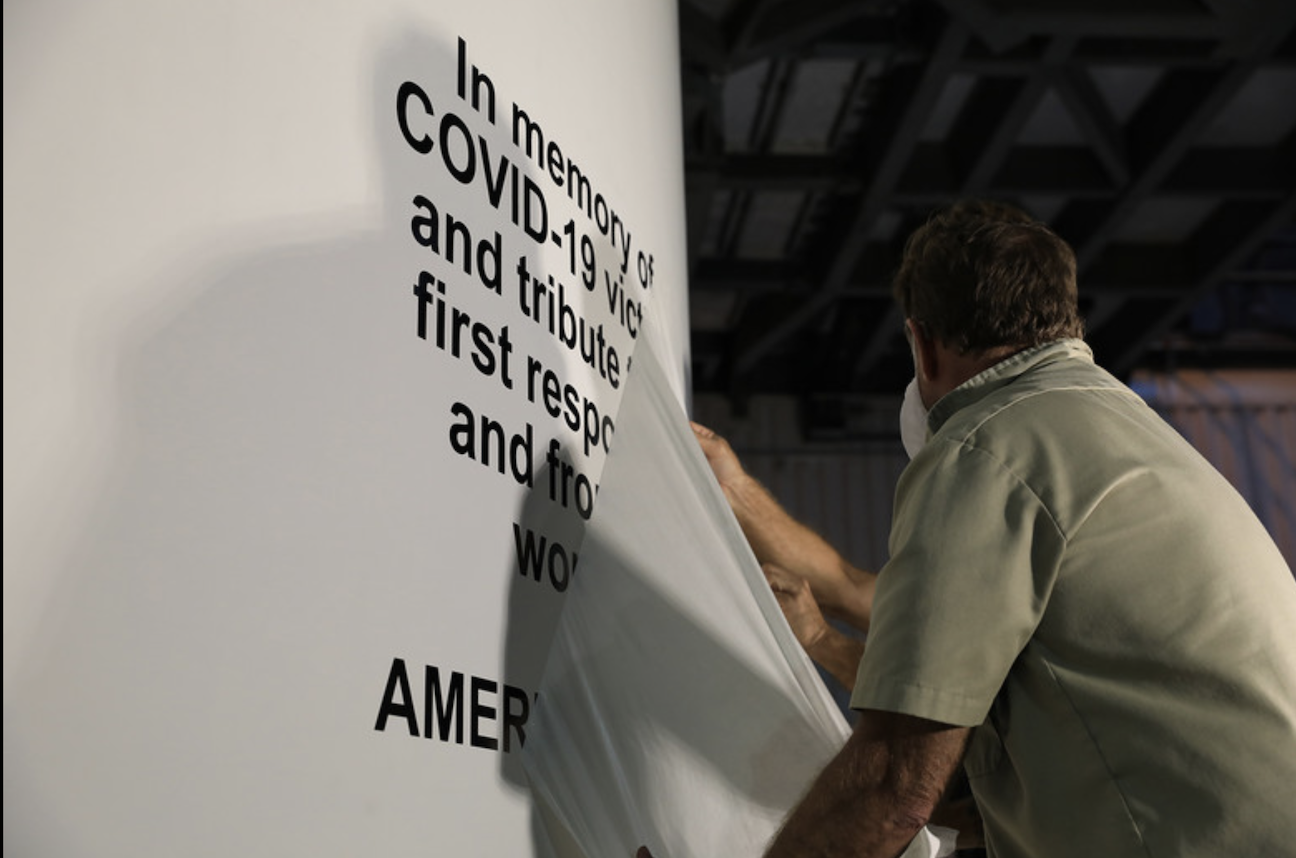 United Launch Alliance staff members apply a special dedication "In memory of COVID-19 victims and tribute to all first responders and front-line workers" March 11, 2020, on the payload fairing of an Atlas V rocket that will launch the X-37B Orbital Test Vehicle for the U.S. Space Force and U.S. Air Force at Cape Canaveral Air Force Station, Florida. The rocket is currently scheduled to launch from Space Launch Complex 41 May 16, 2020. (Photo Courtesy of United Launch Alliance) 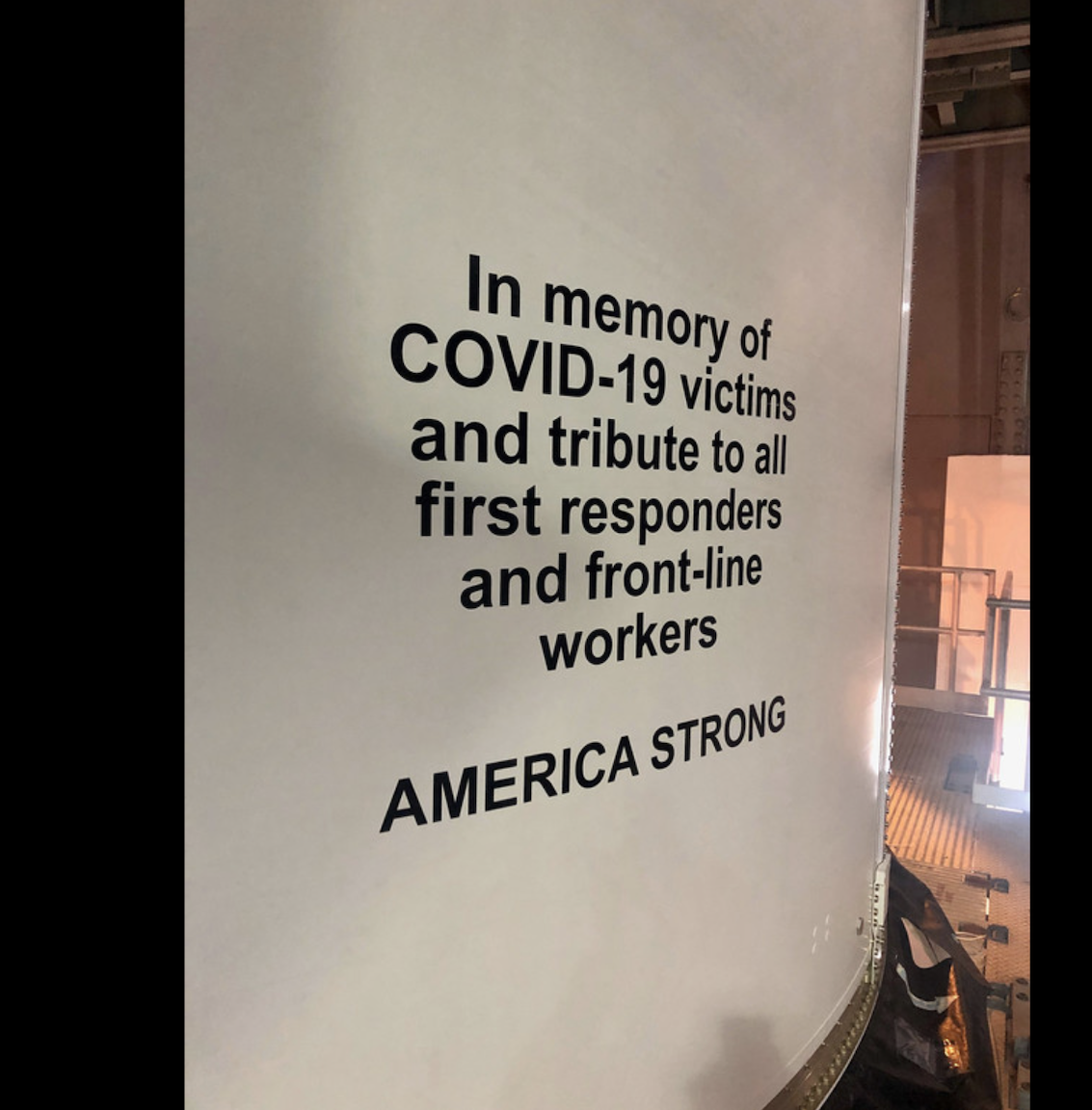 “Despite unprecedented circumstances, we continue to launch critical missions,” said Gary Wentz, ULA vice president of Government and Commercial Programs. “We are honored to partner with the U.S. Space Force and Air Force to recognize healthcare workers, first responders and other essential personnel affected by the COVID-19 pandemic.”

Along with OTV-6, the mission will deploy FalconSat-8, a small satellite developed by the U.S. Air Force Academy and sponsored by the Air Force Research Laboratory (AFRL) to conduct experiments on orbit. The mission also carries two NASA experiments, including a material sample plate to determine the results of radiation and other space effects on various materials. Another NASA experiment will assess space effects on seeds used to grow food. Another experiment sponsored the Naval Research Laboratory will examine the ability to transform solar power into radio frequency microwave energy which could be transmitted to the ground.

An Atlas V 501 configuration rocket, which includes a 5-meter-diameter payload fairing, will launch the USSF-7 mission. The Atlas booster for this mission is powered by the RD AMROSS RD-180 engine, and the Centaur upper stage is powered by the Aerojet Rocketdyne RL10C-1 engine. This will be the 84th launch of an Atlas V rocket and the seventh launch of the 501 configuration. The Atlas V 501 has been used exclusively for national security missions.

To date ULA has a track record of 100 percent mission success with 138 successful launches.

With more than a century of combined heritage, ULA is the worlds most experienced and reliable launch service provider. ULA has successfully launched more than 135 missions to orbit that provide Earth observation capabilities, enable global communications, unlock the mysteries of our solar system, and support life-saving technology.