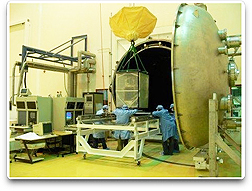 March of 2009 is the scheduled month for the launch of South Africa's microsatellite, Sumbandilasat.

By the way, Sumbandila translates to lead the way in the Venda language. Whether this is a craft designed to acquire data for military and security purposes, or an EO sat designed for a space-related program, is conjecture for those outside either the South African Defence Ministry or the nation's Department of Science and Technology. Sumbandilasat is described as a LEO observation microsat with the payload being a 6.5 m multispectral imager, designed to operate at an altitude of 660 km. 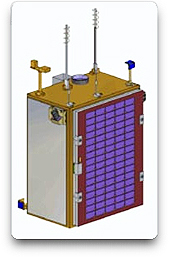 The launch will occur at the Baikonur Cosmodrome in Kazakhstan. The satellite will reach space via a Soyuz launch vehicle supplied by the Russian Roscosmos agency, and it will be the second passenger aboard the launch vehicle. The primary payload is a Meteor-M weather satellite for Russia. Originally scheduled to launch last year from a Russian submarine, such did not come to pass, and no official reason has ever been given for the failure of that mission. The launch vehicle was to have been a Shtil sub-launched ballistic missile, converted to accommodate the Sumbandilasat. Thoughtful expertise regarding the failure revolves around a Russian dismissal of the mission, as South African refused to use and/or lease a Russian satellite for their project. There is a chance the current Sumbandilasat could actually be a separate mission than the previous project, as civilian sat missions are run by the DST and not by the South African Department of Defence. The initial Russian exploratory negotiations were handled by the Department of Defence, indicating the satellite Russia wished South Africa to use was of the military kind. When turned down, the Russians may have simply taken their marbles and set the South Africans packing. Fences have now, obviously, been rebuilt, with the launch now set for Baikonur aboard a Soyuz rocket.

SunSpace has been using the Denel space facilities at Houwteq, near Grabouw, for the past 8 years for the delivery of two satellites. The most recent satellite is the Sumbandilasat. (Photo shows Sumbandilasat in the thermal vacuum chamber at Houwteq.) SunSpace was spun off by the University of Stellenbosch to exploit the design and assembly expertise, as well as the university's private-initiative satellite, SunSat. In 1999, SunSat was the very first South African satellite to ever reach orbit, with a mass of 64 kg. The payload was a small, multispectral imager with a 15 m resolution and attained an altitude of 600 km.

In parallel to the use of the Houwteq facilities, SunSpace has been investing in a technology base for a product range of satellites from 60 kg to 450 kg. Human resources have been developed over the past three years. Export products to date include a 200 kg satellite that has been successfully deployed in space since the beginning of 2007. The facilities at Grabouw are of key importance to the combined space investments of the Stellenbosch University Electronic Systems Laboratory over 15 years, and SunSpace over eight years.

Training for the human resources in the use and control of the satellites in orbit has been ongoing over the past 3 years at SunSpace and Stellenbosch University. The design team is ready for the next satellite program on a permanent basis. 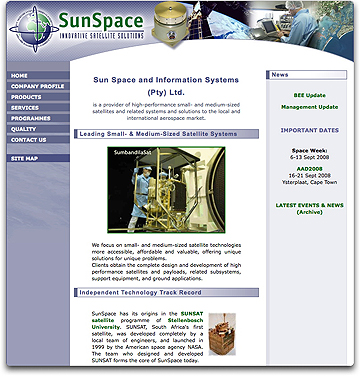