BBC: Russia 'to save its ISS modules' 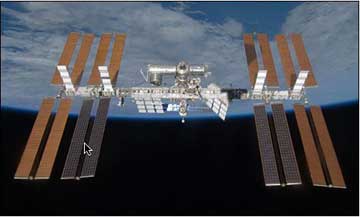 Russia is making plans to detach and fly away its parts of the International Space Station when the time comes to de-orbit the rest of the outpost.

Industry officials told BBC News of plans to keep the Russian ISS modules flying around a decade from now.

ISS partners are optimistic they will be able to extend funding for the project beyond a current 2015 deadline.

But most observers agree that most of the International Space Station will have to be scrapped around 2020.

According to the plans, the remaining Russian modules will form the core of a new orbital outpost, which would serve as a haven and assembly shop for deep space missions heading to the Moon, Mars and beyond.

To facilitate the plan, RKK Energia, the country's main ISS contractor, has already started developing a special node module for the Russian segment, which will double as the cornerstone of the future station.

A ball-shaped compartment with docking ports on six sides would enable the future outpost to stay in space indefinitely, with only individual components being replaced as needed. The current architecture of the International Space Station makes replacement of some of its key modules practically impossible.

Unlike many Nasa and European space officials, Russian engineers are confident that even after two decades in orbit, their modules would be in good enough shape to form the basis of a new space station.

"We flew on Mir for 15 years and accumulated colossal experience in extending the service life (of such a vehicle)," said a senior Russian official at RKK Energia, Russia's main contractor on the ISS.

"I don't see any problems, with the exception of penetration of the modules' skin by a meteoroid. (The vehicles) can fly 20 or 30 years and, if we don't have a direct hit, we can replace practically every internal component. We learnt a lesson from Mir that anything that can fail in this period of time can be replaced."

However, the idea of turning the Russian segment of the ISS into an independent space station carries major political, legal and financial pitfalls, Russian officials admitted.

"I can tell you it is technically possible to separate the Russian segment (from the ISS) and fly free, however, (in this case) there are a number of issues with the... end of the station's life," a Russian space official told BBC News.

The ATV could potentially guide the ISS to a controlled destruction

If the Russians moved the key service module away along with the rest of its segments, the remaining parts of the station would be left without a propulsion capability. This would be needed to maintain the station's orbit or to plunge it into the Earth's atmosphere over a safe area.

According to Russian sources, they have actively discussed their intentions with American partners, but they have so far failed to come up with a satisfactory solution.

"Our position is that the primary integrator of the station (Nasa) is responsible for a civilized end to the flight after the conclusion of the mission," a Russian official said.

"[The Americans] said they understood the issue, but did not go beyond that." To resolve the problem, Russian space officials are eyeing the European-built ATV spacecraft, which has a propulsion system powerful enough to guide the station towards a controlled destruction. But currently, the vehicle can only dock with the Russian segment, and would need significant modifications to implement the new plan.

Manuel Valls, head of policy and plans at the human spaceflight and exploration directorate of the European Space Agency (Esa), told BBC News that the agency did conduct some preliminary studies on how to dock the ATV to the US segment of the station.

However, he said Esa was primarily focused on reaching a swift agreement with its partners on funding for the station until at least 2020.

"If and when the ISS will be de-orbited, which is, again, highly unlikely to happen before 2020, then the right vehicle to do the job would be the ATV," Mr Valls said.

"However, by 2020, we will also have the HTV (a Japanese cargo vehicle designed to dock with the US segment) and probably American vehicles, which could be used as well. It is more than 10 years from now, so anything can happen."

Although the Russian federal space agency (Roscosmos) first announced plans to succeed the ISS with its own space station almost a decade ago, several recent events brought this plan to the forefront of the country's long-term space strategy.

In 2004, the US government made a decision to abandon the ISS in the middle of the coming decade, and direct available Nasa funds toward lunar exploration goals.

Currently, the US space agency plans to end its participation in the ISS around 2015, exactly the time when the newest Russian modules of the station are scheduled to reach the launch pad. 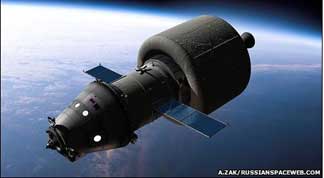 Last year, Roscosmos and Esa failed to reach an agreement on a co-operative project to develop a next-generation manned spacecraft.

Instead, the Russian government committed to the independent development of a new crewed spacecraft. The ultimate targets for this future ship would be the Moon or even support for a manned expedition to Mars.

With the first launch of the new Russian spacecraft optimistically set for 2018, it would probably reach the launch pad by the time Nasa ends its support for the ISS.

Unlike the ISS, which was advertised primarily as a platform for scientific research, Russia's future space station, dubbed the Orbital Piloted Assembly and Experiment Complex (OPSEK), would have the main goal of supporting deep space exploration.

Behind the scenes, Russian engineers have drawn up ambitious plans for orbital stations around the Earth and the Moon, and eventually in the orbit of Mars. These would be linked by re-usable tugs, shuttling between them continuously to support the sustained exploration of the Solar System.

After separation from rest of the ISS, the station's 20-tonne service module could eventually be replaced by a 40-tonne living quarters launched by a new family of rockets.

In turn, this module could ultimately serve as a construction site and a base for the Martian expedition complex, which could be assembled in Earth orbit in the mid-2030s to carry the first humans to the Red Planet.