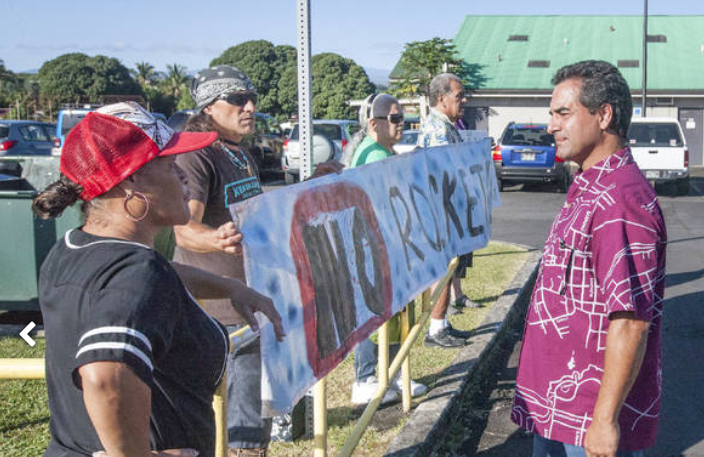 The CEO of Alaska Aerospace Corp. said the organization will have some homework to do after a contentious meeting with Department of Hawaiian Home Lands residents Friday about its proposed small satellite launch facility.

The meeting at the Panaewa Community Center was held in advance of a public meeting planned for Feb. 6 in Hilo.

About 50 people from Panaewa and Keaukaha attended, and none appeared interested in rockets being launched in the area. The site being explored is on W.H. Shipman land between the Mauna Loa macadamia nut farm and the ocean, about 3 miles from the nearest Panaewa homestead lot.

Many of the attendees said enough has already been built on or around homestead communities, whether it be the airport, landfill or drag strip.

“We’re surrounded by pilau,” said Maile Lu‘uwai, who led efforts to relocate a proposed composting facility away from Panaewa.

A common point of view was the proponents need to bring more than promises about jobs or education, but also an understanding of the culture and history.

That’s where some said they thought Craig Campbell, Alaska Aerospace Corp. CEO, was lacking during his talk.

“I don’t hear a word you say because you don’t do your homework,” said Sandra Claveria.

Campbell said he thought he needed to meet with the community to hear the concerns and questions before the public meeting. A time and place is still to be determined.

“The community spoke from the heart,” he said. “I learned a lot about some of the sensitive areas I need to focus on.”

While he and other proponents, including the Pacific International Space Center for Exploration Systems and University of Hawaii’s space flight laboratory, gave an overview of the project, there was no formal presentation or handouts. 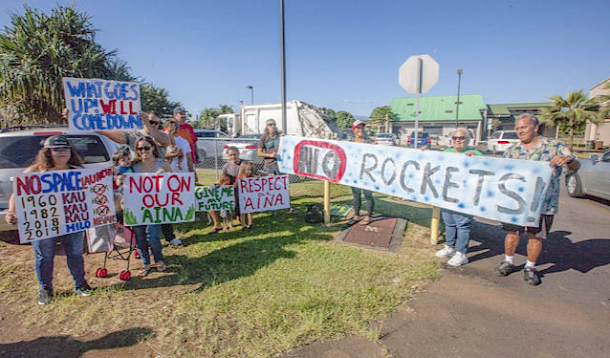 HOLLYN JOHNSON/Tribune-Herald Opponents of a proposed small satellite launch facility stand outside of a meeting with Department of Hawaiian Home Lands residents Friday at the Panaewa Community Center.

Campbell said the rockets would have an average height of 40 feet, and there would be a cap of 24 launches a year.

He said it would only be used for commercial satellite launches, and the site would be smaller than the organization’s existing launch site on Alaska’s Kodiak Island. Two launch pads — one 20 feet by 20 feet, the other 20 feet by 60 feet in size — would be built, but there would be little overall infrastructure.

“It’s not going to be Kodiak here,” he said.

The interest in Hawaii Island is that it can accommodate equatorial launches.

Campbell told the Tribune-Herald that other sites were explored in Saipan and Guam, but the project likely will come to an end if the facility can’t be built in East Hawaii.

Peggy Farias, Shipman CEO, said during the meeting that the company has not decided whether to agree to host the site.

She referred to the proposed site, about 13 acres in size, as being 1.5 miles from Haena beach, also known as Shipman beach. Campbell said not all of the site would be disturbed.

The meeting concluded after a few activists led by Terri Napeahi entered the community center, resulting in shouting and finger pointing with some of the other attendees.

The group of about 10 stood outside for most of the meeting, holding signs in protest.

In addition to blasting the proposal, Napeahi criticized community leaders for agreeing to a meeting she claimed was being organized in secret. She said she grew up next to the Hilo airport in Keaukaha, and sees the proposal as another facility that will cause harm to Hawaiians.

“Our leaders do not speak for me,” Napeahi said. “You are being used.”

Such comments prompted objections from other attendees, with one accusing her of lying.

Rodrigo Romo, PISCES program manager, said Napeahi was emailed about the meeting, along with board members for the Keaukaha and Panaewa community organizations. A board member said they then asked other community members to attend.