Bayer Wants to Use Super-Powered Satellites to Improve Farming


Here's an interesting perspective regarding increasing use of technology in agriculture

There's a growing movement to harness more modern technology in agriculture, whether it's learning from data science or implementing autonomous robots into the fields—both of which we saw at the recent AgBot Challenge. Unsurprisingly, the industry's mega-corporations want a piece of the action.

Case in point: Last week, Bayer announced plans to use cutting-edge space data to offer up tech-driven services to farmers. According to the announcement, Bayer will team up with Planetary Resources, a Washington-based aerospace company, to use its satellite imagery technology

Bayer’s ultimate goals aren’t yet fully explained, as the news signals the start of a partnership that may eventually bear fruit via Bayer’s Digital Farming Initiative, but the company offered a couple of potential examples of what could come.

For instance, Bayer claims the satellites can tell you how much water your soil will retain, so farmers could save water by timing their irrigation systems, as well as get recommendations on when to plant or re-plant crops. Also, the technology could be used to finds problematic areas in the field and provide weekly reports to learn from. In both cases, Bayer would tap into Planetary Resources’ Ceres system of satellites, which uses infrared and hyperspectral imaging to monitor crops—what type they are, how old each plant is, and whether it needs nutrients—and the earth around them. Those high-tech sensors provide much more data than common drone footage can. 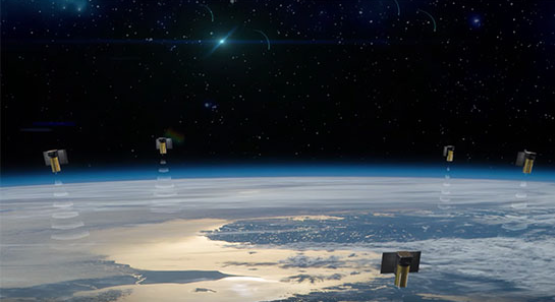 A rendering of Planetary Resources’ Ceres systems of satellites. Screenshot from Ceres video on planetaryresources.com

Given the cost of the technology and the on-demand satellite imagery, these features might seem out of reach for the average farmer—and maybe they will be in the short term, whenever Bayer gets its services up and running. However, the more these technologies become the norm in agriculture, the more approachable and affordable they could become. Ostensibly, by using satellite imagery, farmers could see higher yields and save money by avoiding wasted resources.

Let’s not lose sight of Bayer’s focus in this: The company is massively successful and clearly sees a long-term return on its technological investment here. This is the same company that is trying to buy agriculture giant Monsanto—with Bayer’s initial $62 billion offer rejected last month—to create a juggernaut of the industry. There is surely upside in commercializing technology that can improve farming methods, especially if it eventually becomes commonplace.

It’s also the company that recently refused to stop selling a pesticide that the Environmental Protection Agency deemed unsafe, and as Engadget points out, paid $750 million in 2011 to farmers whose ricelands were contaminated by an experimental strain of genetically modified rice. Bayer’s satellite data services may well offer benefits, although those major missteps could give pause to some interested farmers.

This article is by Andrew Hayward  http://modernfarmer.com/2016/06/bayer-satellites-farming/